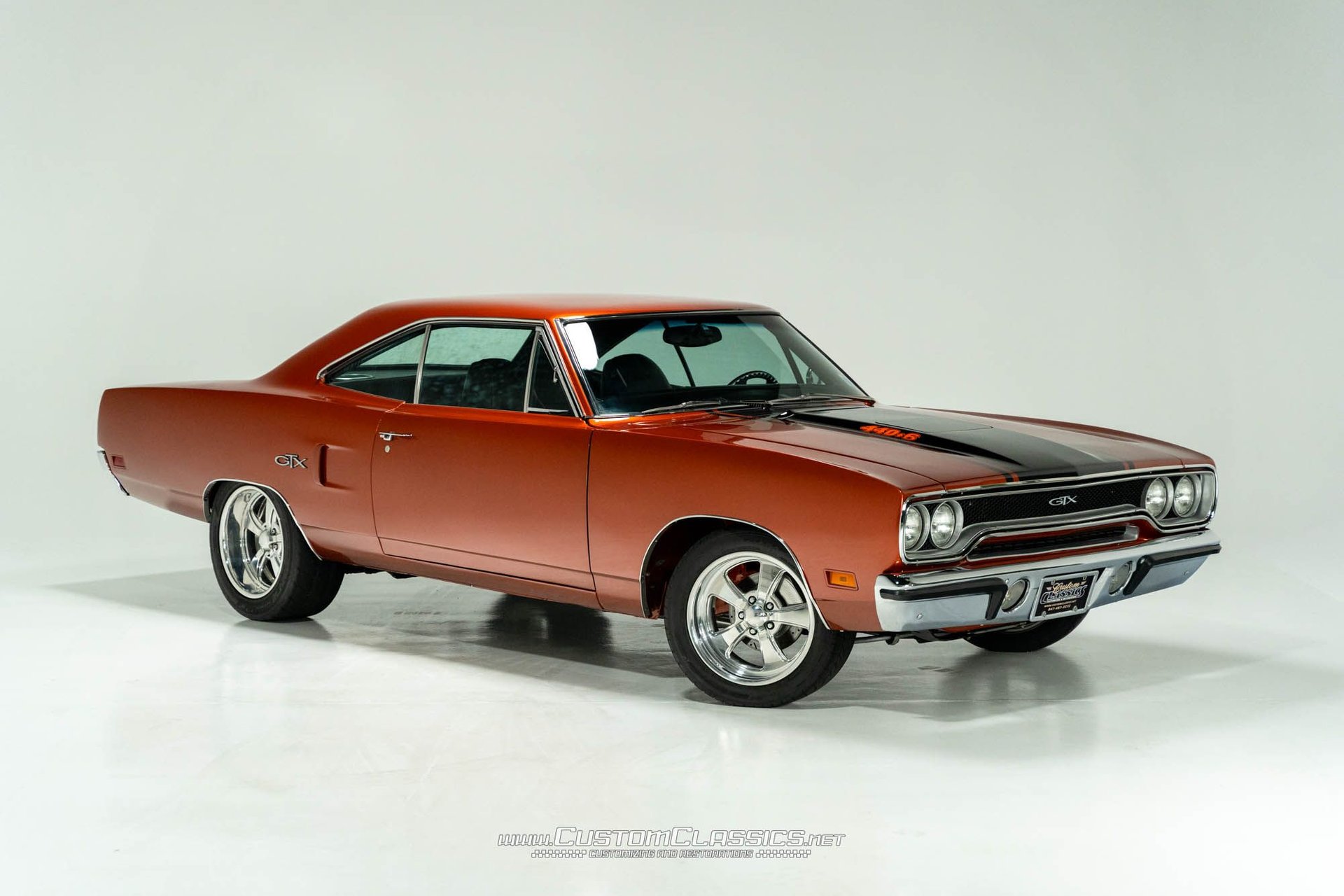 This STUNNING 1970 Plymouth GTX is currently consigned with us for sale. If you have any questions, please fill out a contact form on our website or give us a call. This incredible Pro-Touring Mopar will NOT last long in our inventory so act fast!

Engine:
The 440 has been cleaned up .030-inch over and features JE Pistons, stock I-beam rods, and a stock steel crankshaft. The heads were reconditioned and a mild Crane cam and springs add a little performance to the big-block. Air is drawn through the Air Grabber scoop into a six-pack intake and carburetors. The ignition was converted to an MSD 6AL with a Pro Billet Distributor, and the oiling system is stock. Flowmaster 50-series mufflers deliver the classic muscle car sounds as they control the noises coming from the TTI 2-inch primary headers with 3-inch collectors. The engine setup produces a claimed 510 hp and 550 lb-ft of torque on an engine dyno.

Transmission:
Bill and Earl's Automotive in Baltimore, Maryland, rebuilt the original four-speed shifted by a Hurst Pistol Grip.
Rearend: A Dana 60 with 4.10 gears and sure grip differential.

Suspension:
Polished QA1 shocks were placed at all corners. Up front, the factory suspension was restored to stock and the upper control arms were made from polished stainless. Out back, 2-inch drop leafs were installed along with a Hotchkis Performance sway bar.

Body and Paint:
Dave Vrankin and Mike Baldwin replaced a lot of metal at their shop in Forest Hill, Maryland. After 600 hours of meticulous bodywork, the B-Body was taken into the paint booth for a new Hot Hue from DuPont, Harvest Flame.

Interior:
Barry Schuster out of Perry Hall, Maryland, modified or replaced nearly everything inside the cabin of Steve's GTX. The seats were covered in custom, black leather so he can sit in comfort as he holds onto the Billet Specialties steering wheel. The JVC KDA77 radio head unit is a DVD player with an integrated iPod hookup and Bluetooth, for a touch of modern creature comforts. The stereo pounds out an outrageous decibel level, thanks to a JL 900-watt amp, JL C2 Evolution speakers, and subwoofer. To expand on the modern feel, the car was converted to a keyless entry with remote control of the windows.

""What started as some touch-ups turned into a full rotisserie restoration." --Steve Linthicum

Before you begin any project, it's always a good idea to give yourself a set of rules. Rule one usually revolves around your budget, but each rule after that becomes your personal preference. For Steve Linthicum, rule number two was that he wanted to buy a car that was as close to complete as possible. He knew he didn't want to get deeply involved in a restoration. Boy did he have another thing coming!

The search for Steve's car came back in 2000. "I already had a '67 383 Charger, but I wanted a 440 four-speed B-Body," he tells us. Well, as you know, this is easier said than done. To take matters to the next level, he also wanted to find one that was complete so he wouldn't have to mess around with restoring one. "It's hard to find a car with everything I was looking for: price, options, original condition, and color," he confesses. So, after several years of poor results in the search department, a detour came in the form of a beautifully restored, numbers matching, 383 four-speed '69 Road Runner. After this acquisition, he thought his search was over.

Plans got back in shape two years later at Chryslers at Carlisle when a '70 GTX caught his eye. "I saw this beautiful GTX sitting there and I must have come back to see it 20 times before the end of the show," Steve confesses. "I knew then that this was the kind of car I was looking for. Unfortunately, the car wasn't for sale.”

A new search began, and this time he wouldn't settle for anything other than a GTX. It took him about a year, but he finally found the one that was right for him in Stockdale, Arizona. It was a '70 440-powered GTX with a four-speed, air grabber scoop, and it was painted FK5 Burnt Orange, which happens to be Steve's favorite color. "The restoration on the car was a couple of years old and there were some noticeable spots in the paint that needed work," he says. "It was something I could work with.”

After getting the car back home, he took it to his friend Dave Vrankin who happens to restore classic cars for a living. "When I took the car to him he pointed out a couple more areas of concern," Steve says. "At his recommendation, Dave, Mike Baldwin, and myself stripped all the paint off the car to see what we were working with and it exposed all kinds of problems." His "restored car" appeared to need a lot of new metal and we were too far to turn back now. "What started as some touch-ups turned into a full rotisserie restoration.”

Nothing was going as planned, so, as luck would have it, the plan to keep it stock also took a turn. Since Dave specialized in restomods and hot rods, Steve decided to exploit his talents and add a custom flair to the GTX to match his taste. After three years and 600 hours of body, paint, and assembly, Steve's GTX was finally to the caliber he was hoping for.

As with any project, there are bumps in the road. Unfortunately for Steve, what he thought was a turnkey, ready-to-go car ended up snowballing into a three-year project. He's entirely satisfied with the time, effort, and money it took to bring the vision to life because it's not every day someone legitimately has the dream car, built their way. It just took a little bit of rule-breaking to bring this masterpiece to fruition."