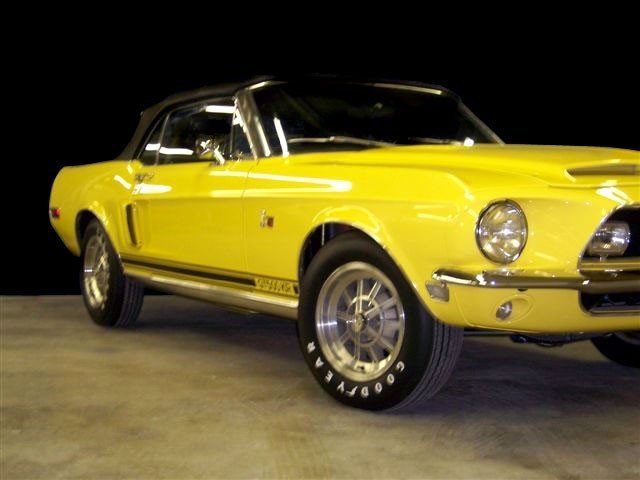 THIS CAR HAS BEEN SOLD

A complete nut-and-bolt rotisserie restoration was completed on this car by Custom Classics.

I am very pleased to be able to offer this extremely rare and valuable Shelby GT500 KR Convertible. With only 518 Convertible GT-500KR's built, the 1968 Shelby GT-500 KR Convertible is the rarest of all Shelby Mustang road cars. This 1968 KR Convertible is in a super rare Shelby "special order" paint color (Code WT6066), bright yellow. According to the "Elite Marti Report" we did on this car, there was ONLY 20 convertibles ever built in this color (WT6066). The report continues to say that out of those 20 cars, only 18 OF THEM had black interior. Out of those 18, ONLY 7 came with air-conditioning. Then, out of those 7, ONLY 6 had AM radios. Finally, ONLY 2 of those 6 yellow cars went to Kenray Ford 3795 Forest lane in Dallas, Texas. THIS IS ONE OF ONLY THOSE 2 SHELBY GT500 KR Convertibles. We have recently been contacted by the other owner of the yellow car that went with this car to Dallas Texas. He currently still lives in Texas and we have his contact information. This car has been freshly painted with polyurethane base coat clear and then wet-sanded and buffed to a smooth high gloss finish. Complete nut-and-bolt rotisserie restoration with factory correct over spray on the under side, and all the factory markings. It is in the utmost perfect condition. It has no more than around 30 to 40 test drive miles since the restoration. If you desire the absolute best, then please read on. The VIN # is 8T03R211027-03900.

According to the Shelby registry this car was supposedly stolen at some point in its life. We were contacted by a man who believed to have owned this car in the past and could not believe that the car could ever have looked this good again. To say the least he was very, very impressed.

The interior of this car is primarily original with the exception of the carpeting which has been replaced during the restoration. When Custom Classics purchased this car it was in decent condition. The main reason we decided to pull this car completely apart again and completely restore it back to its original factory show room condition is that we feel strongly that such a rare car was worthy of all the time and cost. We also feel that the Shelby GT-500 KR's always seem to weather through any economy very well & continue to pull strong money. True collectors everywhere will appreciate our attention to detail, as well as all the time spent hunting down correct parts to bring this car back to its phenomenal condition.

The sky is the limit with these rare KR Convertibles and they are truly one of the best collector car investments one could make. They don't call them "King of the Road" for nothing.

Please view all of the restoration pictures below for a better idea of how much detailed work went into this car.

According to the automotive press: "For 1968, the 428 engine increased in horsepower by 5 over the prior year. This was the result of a single four-barrel aluminum intake manifold in place of the prior dual-carburetor setup. To honor this achievement, the GT500 equipped with the 428Cj now became known as the GT500, or King of the Road. The documentation stated the engine produced 335 horsepower when actually it was over 400 with 440 foot-pounds of torque. These were the fastest Shelby production vehicles to date and offered superb handling, braking and most of all, acceleration. Due to the extra power, the brakes were enlarged and new components such as under-hood suspension bracing and staggered rear shocks prevented wheel hop and axle wind-up."

This KR is optioned with automatic and factory air conditioning and has been signed by Mr Carroll Shelby himself, and Truly unique. Mr Shelby viewed this car again this summer 2009 at the EAA air & car show .we have some new pictures of him next to the car , and one of our company representatives who worked the show for us on that sunny summer day. this car was personally invited to be among some of the top 75 Ford cars to attend this special show in Honer of Mr Shelby. the cars were all placed in a horse shoe shape, and then they spelled out Ford in the middle of the horse shoe. this was all done using these 75 special invite cars,it was really amazing to see.

** The Framed Marti Elite report will accompany this car and can be seen in the pictures section of this ad.

On January 21, 2007 when Craig Jackson was asked about his impressions of this years auction, he noted first and foremost the strength and incredible staying power (I'm paraphrasing) of the classic Shelby's. The prices achieved and the excitement generated are clear proof of his words. The good news is that the buyer of this Shelby KR will not be required to pay an additional 10% buyers commission as he/she would if this car was purchased at Barrett-Jackson this year.

Contact Bryan at 1-847-487-2272 or e-mail me at bryan@customclassics.net if you are interested in restoring your car or would like us to try and find you a similar car.