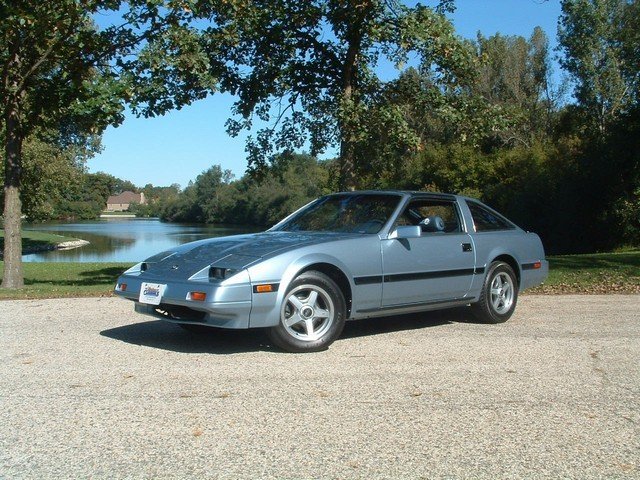 COMPLETE RESTORATION. THE BODY WAS STRIPPED , STRAIGHTENED AND PAINTED. ALL THE SEATS WERE RE-COVERED AND NEW CARPETING AND DOOR TRIM PANELS WERE INSTALLED. NEW WHEELS AND TIRES. THE CAR WAS SENT OVER TO NISSIAN , WHERE THEY DID ALL THE TUNING, BRAKES AND MISC REPAIRS THAT IT NEEDED. THE CUSTOMER HAD ALL THAT WORK DONE BEFORE BRINGING THE CAR IN FOR THE RESTORATION WORK. THE OWNER SPENT CLOSE TO $40,000.00 ON THIS RESTORATION. HE UNFORTUNATELY PASSED AWAY BEFORE COMPLETING THE CAR. CUSTOM CLASSICS HAS NOW COMPLETED THE PROJECT, AND WE ARE PROUD TO BE ABLE TO PRESENT PROBABLY ONE OF THE NICEST 300ZX NISSIANS IN EXISTENCE.

The 1984-1989 Nissan 300ZX replaced a 280ZX that was starting to show its age despite strong sales. The traditional style was becoming dated and its basic engine design originated in the 1960s. Plus, other Japanese manufacturers were introducing fresh competition, such as the Mitsubishi Starion, the Mazda RX-7, and the Toyota Supra.

Styling details on the Nissan 1984 300ZX were cleaner . The 1984 Nissan 300ZX was about as different from its predecessor as it could be. The original rounded contours and scoop headlamps were replaced by a wedge profile with semi-concealed headlamps. A potent 3.0-liter V-6 replaced the classic inline-6.

Continuing a trend dating back at least as far as the 260Z, the new Nissan 300ZX was more luxurious as well, more grand tourer and less pure sports car. However, sales had climbed with every model change, and from that standpoint, Nissan was doing the right thing.

The styling was undiluted 1980s, chiseled and italianate. It was still available as a two-seater or a 2+2; the two-seater continued as a fastback, the backlight reaching almost to the tail. The 2+2 had a flatter roof with a steeper backlight. Both body styles were quantifiably more-efficient shapes than earlier Zs.

Compared to the previous inline-6 engine, the Nissan 300ZX's V-6 was shorter front to back, not as tall, and only slightly wider, all of which allowed a lower hoodline.

In contrast to the 280ZX's 0.38 drag coefficient (Cd), the standard Nissan 300ZX had a Cd of 0.31 and, thanks to a chin spoiler and small rear wing, 0.30 for the inevitable Turbo. The Nissan 300ZX also produced more power than its predecessor: 160 horsepower.

The Turbo's Garrett AiResearch T-5 turbocharger helped boost output to 200 horsepower. A choice of 5-speed manual or either 3-speed or 4-speed overdrive automatic transmissions was offered.

The suspension was still strut-front and semi-trailing arm-rear, but with better geometry and improved bushings for better handling and ride. Standard on the Turbo were driver-adjustable shocks.

Another novelty was an optional digital instrument panel, a technological tour de force, but unfortunately hard to read.