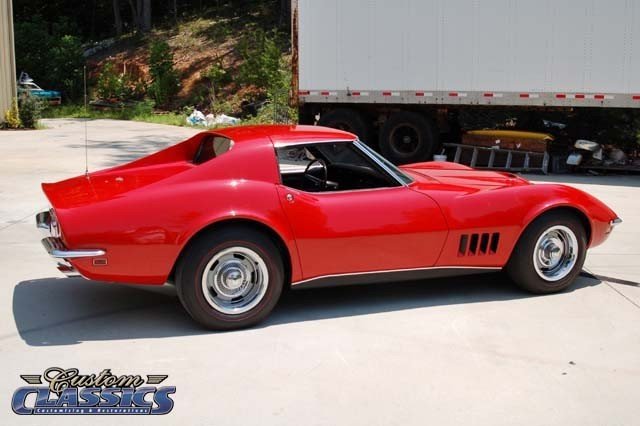 SORRY THIS CAR HAS BEEN SOLD

Featured in Car and Driver magazine!

This is a ultra rare 2 owner (1 of 1 with this color combination) L89 Corvette with full documentation that includes radio booklet, owner's manual, original sales invoice, protecto plate, title and keys. It has been frame-off restored and is perfect in every single way. The body has beautifu, wet-looking correct code-974 red paint with an extremely rare code-435 Tobacco colored interior. Never has a Corvette been dressed this well!

If you are in the market for an incredible investment-quality Corvette, look no further. This car is completely show ready and ready to wow any crowd with its historical value and unrivaled beauty. Truly a one of a kind car.

Some more information about the 1968 Corvette:

"All Different, All Over"
That quote from the 1968 Chevrolet Corvette brochure said it very well. Five years earlier the 1963 Chevrolet Corvette would establish the Corvette name as a design tour de force. The 1968 would reinforce that reputation with an all-new body style.

The new design would become a classic. Corvettes for the next forty years - including the C4, C5 and C6 generations - would follow the same basic lines and be recognizable as a relative of the 1968 trendsetter.

The new Corvette featured what became known as the "Coke Bottle" shape. It's in reference to the fenders which bulged out in comparison to the doors. Also note the emphasis on the fenders as they arched upward - a continuation of the C2 Corvette.

The shape of the new C3 also featured improved aerodynamics when compared to the C2 Corvette. Front end lift during high speed was a problem that many racers complained about. Corvette chief engineer Zora Arkus-Duntov said in interviews that the C2 'vette "had the aerodynamics of a bad airplane".

The body style may have been all new, but the chassis was exactly the same as first introduced in 1963. This was still a good thing as even five years later it offered great performance and excellent value. The new body did allow for an increase of 1" of wheel width, so seven inch wheels were standard. Also unchanged was the engine selection, which was the same offering as 1967.

Check out the slide show or feel free to enlarge the photos individually. Pictures do not do this car justice.