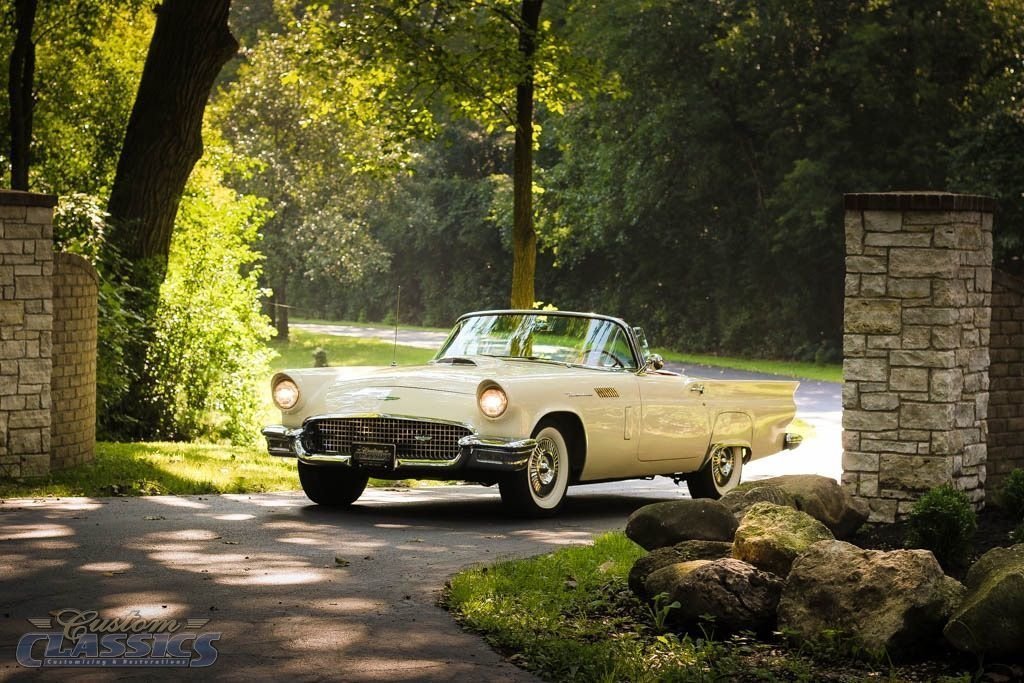 Ah yes, the wind in your hair, the sun warm on your face, the low rumbling of a V8 providing music to your ears, and a winding road in the country... it's a daydream a lot of us classic car guys may have had at one point in time. However, few of us actually have the opportunity to live it - even still, in an iconic American car like the 1957 Ford Thunderbird. Fortunately, we're here to help those dreams come true - you just have to make it happen!

Two cars literally defined the newfound freedom of the 1950s: the Chevrolet Corvette and the Ford Thunderbird. Eventually, Chevrolet took their Corvette to the racetrack, while Ford continued to turn their Thunderbird into the ultimate boulevard king. Now, over sixty years later, first generation Corvettes are cool, but first generation Thunderbirds are more endearing. If you're looking for a sweet 50s-era classic that's valuable, fun to drive and has the ability to turn Main Street into a parade route, look no more! Want to be the star of that parade? Then check out this award-winning, largely-original Thunderbird, backing a 312 cubic inch V8 with a correct Ford-O-Matic 3-speed. It really doesn't get better than this in the way of 50's American collector cars.

BODYWORK/TRIM
This largely-original T-bird was daily driven in Utah until someone in Indiana purchased it and had it shipped across the country. Then it changed hands again in Indiana to a farmer, and in August 2014 the current owner Paul purchased it, making him the 4th owner of this car. Paul then did a complete frame off restoration on it. Paul jumped in pretty quickly and started the frame off after taking ownership of it. Once he completed it in spring of 2016 this Thunderbird hit the road as a clean, body-off restored classic that wraps all-original sheet metal around a roster of original components.

The Thunderbird was Ford's refined response to Chevrolet's crude Corvette. And when introduced in 1955, it outsold Chevy's newly minted halo by almost 24 to 1. Part of the reason for that big success was the car's versatile mix of American substance and European aesthetic. At the front of this 'bird, a stainless egg-crate grille rides between clean headlights, chrome-trimmed parking lamps, an intricate header emblem and a bulleted bumper that bends around peaked fenders. Between those fenders, a classy hood scoop leads the eye to a wraparound windshield that's reflected in a correct chrome mirror, cleared by polished stainless wipers and framed in thick chrome trim. At the top of that trim, a Colonial White hard top latches down over a white soft top as a part of Ford's innovative dual-roof system. Below those roofs, sculpted door handles and stainless-trimmed fender skirts perfectly complement sedate louvers and flowing "Thunderbird" scripts. And at the back of the car, chrome-trimmed, jet-inspired taillights center an intricate trunk emblem above a second wraparound bumper.

ENGINE
Open this Ford's lightweight hood and you'll find a 312 cubic inch Thunderbird V8. Introduced in 1956, this stout little Y-block remained an option in blue oval staples well into the mid-70s. At the top of the bright orange mill, a functional hood scoop funnels wind into a mirrored and decaled air cleaner that's perched on a big Holley carburetor. The carb is bolted to a color correct intake manifold and cast-iron heads that are topped by polished and Thunderbird-branded valve covers. At the front of those covers, a rebuilt generator spins 12 volts of electricity beside a vintage AC fuel bowl and pliable FoMoCo hoses. Spark comes courtesy of a traditional points distributor, which sequences fire between a modern battery, a proven FoMoCo voltage regulator, and fresh plug wires. From its glossy fenders to its chrome oil filler, this roadster's bay presents a clean, highly detailed appearance. And best of all, the spry engine fires instantly and sounds surprisingly beefy breathing through brash turbo mufflers and restored factory manifolds.

DRIVETRAIN/SUSPENSION
At the bottom of this Thunderbird, a fully sorted undercarriage houses solid floors that are bolted to a roster of proven components. Nice enough to show but still fully drivable, this is the perfect compromise for enthusiasts who like to display their car and still enjoy the occasional top-down weekend. Behind the aforementioned Y-block, an overhauled Ford-O-Matic 3-speed spins power to what appears to be a traditional Ford 9-inch. The car's suspension remains in its original configuration, with control arms up front and leafs out back. Turns come courtesy of lucid steering. Braking is quick and adequate thanks to power-assisted drums. All of the chassis' parts feature a weather-free appearance, reinforcing the idea that it's been a very long time since this 'bird's seen daily-driver duty. And on the outside of those parts, color-keyed wheels spin 205/75R14 American Classic whitewalls around white-trimmed center caps.

INTERIOR:
Colonial White paint is legendary for its characteristically upscale feel. And when paired with this Thunderbird's bright white roof and rich red vinyl interior, it creates the perfect culmination of class and sophistication. Thanks to the car's quality restoration, its pleated bench seat is livable for years to come. There's tight carpet that, thanks to thick, color-keyed mats, features a fluffy red tint. Front and center, classy telemetry and a familiar Town and Country radio look great inside engine-turned bezels. In the middle of the floor, a chrome shifter feels both firm and precise. In front of the driver, a glossy steering wheel spins a chrome horn ring around a mirrored steering column. At the sides of the passengers, scuff-free door panels center perfectly placed armrests below pristine, engine-turned trim. And behind the soft top, a fully restored trunk centers a full-size spare tire between a fresh mat and old school jack.

There's a reason these cars have built a legacy of cruising, seeing, being seen and looking fantastic. Just imagine sliding into this 'bird's comfy vinyl seats, firing up its throaty V8 and chasing the sun down your favorite two-lane black top -- it doesn't get much better than that!