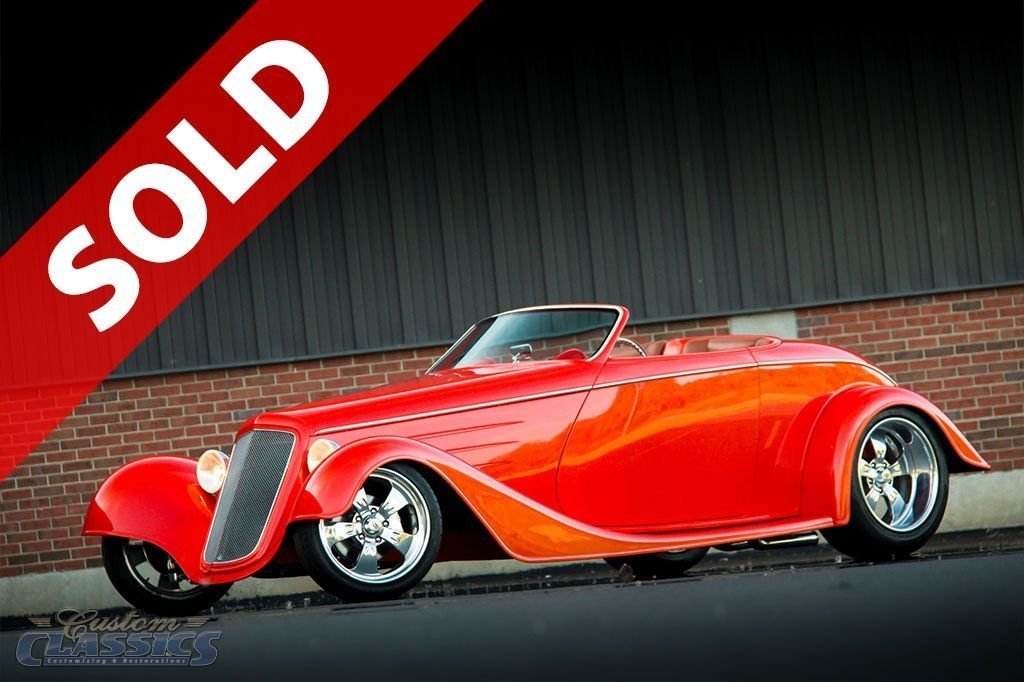 This car was a top 6 Contender for the 2007 “Most Beautiful Roadster“ award.

With estimated costs to build this car at over $440,000.00 its time for you to grab onto a very unique car with a pretty cool history behind the build at a near fraction of the cost of you building it yourself.

Sound Machine - Custom Autosound Cranks It Up
"There was a time in our history, and not too long ago at that, someone could come up with an idea, and through a need for that product, become successful. Call it the “better mousetrap” syndrome. People like Carl Sprague, owner of Custom Autosound, are those who took an idea and ran with it. In Sprague's case, it was in 1977 that he took a newer AM/FM-cassette capable radio and adapted it to work in his AM-only-equipped 1963 Corvette. And as these usually happen, it was through prodding from friends and others who wanted him to upgrade their cars that he saw an opportunity to make a nitch for himself. He soon was producing vehicle-specific units that looked like the stock unit, and fit in the stock location, but had all of the latest features that any driver really wanted in their sound system. And the rest, as they say, is history.

Sprague has always been a Corvette guy. From his earliest days, the iconic Chevy was the car for him, and he has had quite a few. So when he thought about building a hot rod, he knew that he wanted a Chevy, and he wanted it to be a roadster: he likes the breeze when he drives. So he put in a call to Barry White at Barry's Speed Shop of Corona, CA, who said he could build what would look like a 1935 Chevy Roadster, but would be full on. Sprague liked the sound of that and agreed to go ahead with the project.

If the body looks familiar, it should. It is a Coast to Coast Street Rods Impact II 1933 Ford unit that Tony Correia of Speed Shop Custom Paint of Corona, CA, modified to appear more like a 1935 Chevy. In another effort to give it a Chevy look, Marcel's Custom Metal Shaping fabricated a new hood. Correia also installed the Corvette dash into the car with original speedo and mileage, but only after he chopped it into pieces and tossed out the center section. The crew at Barry's Speed Shop fabricated a new grille with surround that also plays into the '35 Chevy theme. For those who know, orange seems to be White's signature color and it works perfectly with the '35. The paint in question is actually a PPG-based special mix that Correia blended especially for this car. It has a healthy dose of pearl added to give it that pop, as if the car needed any more help.

To give the body (and Sprague) a good mount, Barry and his crew constructed a custom frame. Included in the job were some very cool suspension components by Kugel Komponents. One of Jerry Kugel's incredible IRS rear ends as well as a KK IFS system now adorn the car and not only give it the perfect hot rod look, the KK units work very well and give the car perfect handling characteristics.

Since this car is a convertible (Convertible? There actually isn't any top! -Ed.), the interior needs to be great looking as well as comfortable. Accomplishing these two requirements has never been a problem for the crew at Gabe's Street Rods Custom Interiors of Paramount, CA, and the job they did on the '35 is up to their normal high-quality standards. From fabricating the seats and door panels out of high-density foam to covering them with leather, they did it all, including wrapping the Budnik steering wheel. Including laying the Mercedes carpeting. Their fine job extends into the trunk as well. As stated, the dash is out of a Vette, but the gauges are by Classic Instruments, while the stylish floor shifter is an Auto Max unit that extends through a Correia custom made unit that he calls a “waterfall” but the rest of us call a center console. You know, artists. Keeping the occupants well settled into the seats are Custom Accessories 3-point harnesses.

And while the rest of us get by on a single stereo, the official Custom Autosound Chevy gets two. Yep, twin Secretaudio units have been mounted in the door panels (well, there are two of them too, you know) and send out their electrical impulses to the 5-1/4-inch Brand X speakers. Brand X is another of Sprague's many companies.

Last but not least, let's talk about the power plant that propels the car. Looking vintage is no mere effect here; the engine is a 1963 Chevrolet 327-cid engine. [When the car was first shown it was outfitted with a refurbished mechanical fuel injection system from a 1957 Chevy. Any of you that have owned a car with an older refurbished fuel injection system knows that they can be difficult to maintain and awfully finicky at times. So, the car now has a more dependable, polished Edelbrock 4-barrel carburetor with a polished Edelbrock intake manifold that helps it start right up and drive on reliably.] A Turbo 350 tranny got the nod to channel the horsepower to the Kugel rear end.

As sweet as this car is, it was only made possible by the fact that Carl Sprague had the brains and ingenuity all those years ago when he started Custom Autosound. And as with CA, Sprague knew what he wanted when he commissioned Barry White to build his car: he wanted a Chevy and he wanted to feel the wind in his hair when he drove it. See, with hard work and knowing an opportunity when it appears, good things can happen.” (source: www.motortopia.com)

Good things can happen to you now too! After showing the car for a few years, it was time for Carl to move on with a new project for Custom Autosound. Again, the estimated build cost on this stunning, one-of-a-kind roadster was around $440,000.00, and the time invested into perfecting every detail is clearly evident. This is a fantastic opportunity for one to own and drive something so special at around a quarter of the build cost. The great things about these custom Chevy roadsters are that they are truly timeless pieces of art that collectors and enthusiasts alike will desire and appreciate for years to come.