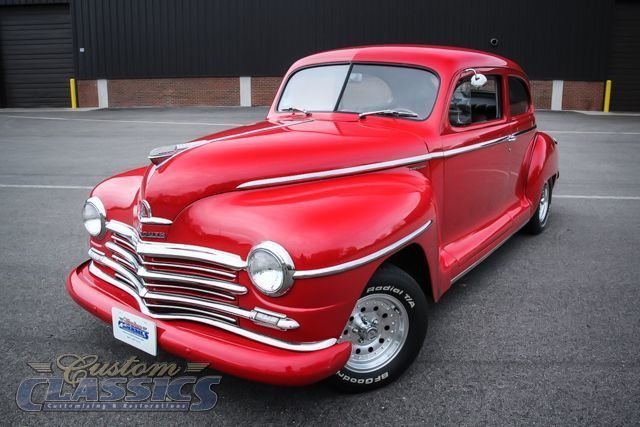 I am pleased to present a beautiful example of post-war American-built automotive history with this 1946 Plymouth P15 Deluxe. The car has been tastefully upgraded for today's driving pleasures and is a bargain buy for any classic car enthusiast looking for a car-show cruiser, or just a fun weekend driver.

Much like the rest of the post-war American automotive industry, Plymouth essentially began selling warmed-over versions of their 1942 lineup. In order to get back on the market as quickly as possible, the P-15 model carried only minimal exterior changes from the previous model, namely in the grille, and it continued to be offered in both DeLuxe and Special DeLuxe trims. The DeLuxe was limited to three- and six-passenger coupes as well as a two-door sedan like this example. Plymouth continued its well-earned reputation as reliable and affordable family transport, and the 1946 model's biggest strength was its affordability. In all, approximately 260,000 Plymouths were sold their first year back on the market.

Today, Plymouth P-15s offer plenty of attention for the dollar, especially dependable and fun "driver" cars like this one. The car was purchased from the previous owner with a 318ci V8. In 2008, the owner tried to repair that engine but the timing chain had bad links and the motor had a myriad of other costly problems and ended up needing to be replaced. So, the decision was made to take the older engine and swap it out for a more dependable 1970-72 318ci Dodge Dart V/8 from Miller engines mated to a 3-speed automatic. Around that time, a new alternator was installed and new batteries. In 2009, the car received a full brake job and a new triple-core radiator as well as the a repaired wheel cylinder which is in great working order now. The car rides on a 1974 Plymouth Duster front suspension that adds power steering and 10” power disc brakes - which is a very welcome improvement from the stock setup. The rear suspension on this Plymouth has been upgraded and now sits on a 1975 Dodge Ram pickup rear differential with the original suspension improved with helper springs. This car even has the original "Model 36 Mopar Deluxe" heater on the passenger side. To finish everything off, this car had to have the right “look” now that it was ready for the show strip and cruising, and to do that, the owner tastefully gave the car all new aluminum American Racing wheels with BF Goodrich Raised Letter T/A radials.

These cars are not that luxurious for their time, but they are unmistakably of the era and stand out in nearly any venue you may take them. The immediate post-war cars are also overlooked in favor of later post-war designs, so they remain reasonably priced as a general rule, especially when compared to similar vehicles from Ford and Chevrolet. With an upgraded motor, suspension, wheels and tires, this Plymouth Deluxe is an absolute bargain for any classic car enthusiast and an outright pleasure to drive.