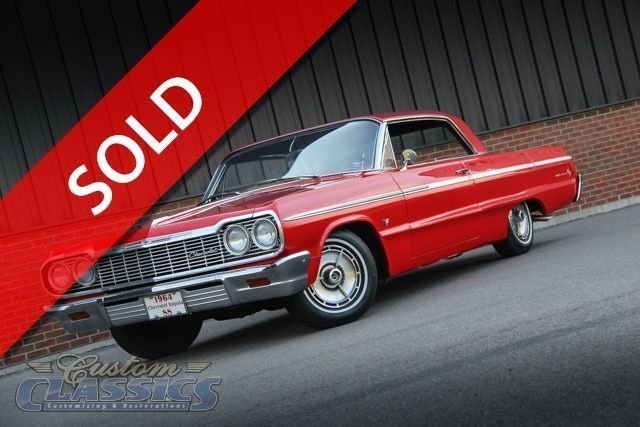 A vast majority of the vehicles that comes through our showroom is either flawless, concours-level show fare or incredibly original, low-mileage trailer queens. But, as awesome as those rare and exclusive cars are, the foundation of this hobby has always been old school stalwarts that we can drive, build on, show off and enjoy. Think about it, when you were a kid, did you dream of towing a pristine factory-original car to a field where it would sit and look pretty? No way! You wanted a classy head turner that was striking, cool and expressed your individual tastes as you cruised down the highway.

Professionally restored and powered by a 327ci Chevrolet V8, this impressive Impala SS is the kind of fully sorted cruiser that you can fire up, press the go pedal, and road trip across the country in!

Since completion of a full body-on restoration in 2005, this top-of-the-line Chevy still displays great bodywork that simply glistens under our bright showroom lighting. A lot of time and effort was put into making sure this big cruiser looked great from all angles, and it shows where it counts. Bright Riverside Red is the color most folks imagine when they picture a '64 Impala in their minds, and this one is every bit as nice as the fantasy. The car originally was born with 936 Ermine White paint but during the restoration it was tastefully bathed in a rich layer of the 923 Riverside Red that's been sealed in a rugged clear coat shell and buffed to a spectacular shine.

Chevrolet's third generation Impala is a sleek and stylish piece that, with its absence of excessive chrome, suggests GM had officially left the tailfin-induced bender America enjoyed throughout the 50s. At the front of this showboat, a body-width stainless grille hangs a small “Chevrolet” script and four T3 headlights between a red, white and blue hood crest, a wraparound chrome bumper and amber parking lamps. At the sides of the car, traditional cross-flag emblems combine with quarter-mounted “SS IMPALA” emblems to break up a sea of flowing red paint while traditional chrome door handles perfectly complement SS-specific side trim and stylish rear fender skirts included in the trunk. At the top of the car, chrome hood and trunk spears lead the eye to like-new glass that's flanked by two chrome bowtie mirrors, cleared by two bright wipers and sealed by a series of well-maintained stainless trim pieces. And at the back of the car, a stainless-trimmed and “CHEVROLET” branded valence hangs six traditional taillights, a second crest, a small “IMPALA SS” emblem, and a second wraparound bumper.

Powering this real-deal Super Sport is a non-numbers matching 327 cubic inch V8 from the 1967 year. At the top of that famous block, a heavy-duty single-snorkel air cleaner forces oxygen into a large 4-barrel carburetor that's clamped into the fuel lines. Fuel and air flow from that old school carburetor into a factory intake from a '62-'65 model year that's bordered by factory Chevrolet heads and painted and decaled “Chevrolet 327 Turbo-Fire” valve covers. Those valves send spent gases into correct cast iron exhaust manifolds which are bolted to a 2.5 inch true dual exhaust system that's marked by an awesome, and equally deep, roar. That roar is a product of sparks sequenced from a familiar points distributor to Premium High Temperature 7mm plug wires. Those sparks are generated by pliable V-belts which spin a modern alternator, a factory power steering pump and old school Harrison components behind a correct fan & shroud, with a factory correct looking radiator. And this B-Body's entire engine compartment, from its Chevy red paint and satin black inner fenders to its reproduction updated battery and after market plastic washer fluid holder, is nicely detailed and ready for both show and go.

One look underneath this sturdy cruiser reveals a solid chassis that's just as ready for the road as that small block 327. Power is put to the pavement by an era-correct Muncie 4-speed trans. Holding that virtually unbreakable transmission off the ground is a restored double A-arm front and three link rear suspension. That suspension's handling is greatly enhanced by factory power steering and power drum brakes that are piped to a fresh master cylinder and an equally fresh brake booster. Exhaust flows from the aforementioned manifolds to factory replacement mufflers and hidden turndowns that stop just short of the car's broad rear bumper. The body's floors feature a coat of undercoating that was bestowed upon them during the restoration. The floors appear to be solid, and all the floor mounts are in place on the body as well as the frame. At the corners of those floors, standard 14 inch steel wheels spin modern Steel Radials around Super Sport specific wheel covers.

Covered in a contrasting black sheen, this Chevy's great looking interior has been restored to factory-fresh condition in virtually every way. The SS-specific front bucket and rear bench seats feel newer than the car's 48 years would suggest, and present just as well now as the day they rolled out of the upholstery shop. At the base of those seats, like-new carpet is bordered by straight Fisher sill plates and displays hardly any wear at all. At the sides of that carpet, awesome two-tone door panels hang small “SS” emblems over chrome window cranks, chrome door handles and pliable black armrests. At the front of those door panels, a restored dash is chock full of rebuilt gauges, and carries what appears to be an original radio. At the base of that dash a stylish, SS-specific console props a chrome shifter in from of a small, lockable storage compartment. In front of the driver, a deluxe steering wheel spins around a traditional Chevrolet horn button. And behind the passengers, a fully restored trunk carries a correct mat, a correct jack, side skirts, and a full-sized spare tire below fresh deck lid decals.

This fully sorted true 1964 Chevrolet Impala Super Sport is a wonderful car to drive, enjoy, and haul three or four of your coolest friends in. It's really no surprise that these cars are amazingly popular with almost everyone who sees them because they have such a great combination of style, presence and performance. So, what are you waiting for? Pick up the phone, park this '64 hardtop in your garage and get ready for a great summer of carefree cruising!