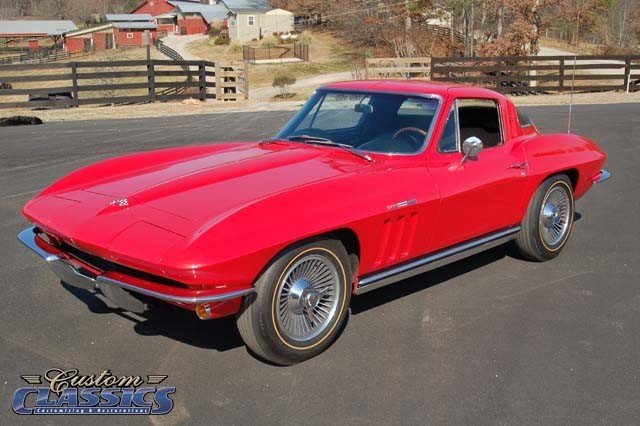 *Sorry, this car has been SOLD. If you like this car and want something similar, Contact Us.*

This Corvette has undergone a complete and meticulous, frame-off restoration. It is one of only 771 built. Not a dime was spared on the restoration, and it shows. The body fit is excellent with no sign of repairs to the fiberglass. The car is very correct with all the correct components. All chrome and stainless are polished or re-chromed. This is a show-quality car in every respect.

1965 is an important year for Corvette. A long desired and needed upgrade - disc brakes - became standard equipment. The good news is that they appeared on all four corners, not just the front as was common practice of the day. Racers were particularly happy with this latest development as they had long been suffering with drum brakes. Although special sintered metallic linings had been available, fade under racing conditions was still a problem. Jaguar had been offering four wheel disc brakes on their more expensive E-Type and it wouldn't do for the Corvette to be playing second in any area. The unloved drum brakes were still available as a deletion credit (RPO J61, -$64.50) and 316 Corvettes were so equipped.

New Kid In Town
A new era was ushered in when a leading edge class of engine, fondly known as the "Big Block" was introduced late in the 1965 model year. At the time a huge horsepower race was taking place industry wide and the 396 cu. in. Turbo-Jet was the Corvette's ticket to the party. Rated at 425 hp, it furthered the Corvettes' Bad-Boy reputation. It also represented the first time a Corvette motor was rated at over 400 hp.

A new hood was required to clear the massive motor and a handsome new "bubble hood" design (left) was introduced. Top: Functional vents in the side nicely broke up the area. Indications are that due to supply problems at the time, a number of small block Corvettes left the factory with the big block hood.
Most of the horsepower advantage in the new motor could be found in the design of the heads which were nicknamed "porcupine heads", a reference to the way the valves were located at odd angles similar to the quills on a porcupine. The entire big block Corvette was thus sometimes known as the "fiberglass porcupine".

The physically much bigger engine required an enhanced cooling system. There was another drawback; approximately 150 lbs. of added weight, all of it on the front wheels. The weight distribution changed to 51% front / 49% rear, a handling disadvantage compared to the better balanced small block alternative.
396 side signals signified new respect for impromptu Grand Prix stop light contestants.

A close examination of the specifications and the options list reveals an interesting fact that makes the 1965 'vette particularly interesting to car collectors. 1965 was both the first year for all wheel disc brakes and the last year for the fuel injected engine. The two magic performance features would not appear together until 17 years later in the 1982 Corvette. In 1965, fuel injection cost an extra $538.00, adding over 13% to the price of a convertible. The 396 cu. in. motor added only $292.70 to the bottom line yet was rated at 425 hp; 50 more than the fuelie. With the fuel injection system's reputation for complexity and maintenance requirements well known, the days were numbered for the option that first shook the automotive high performance world in 1957.
(http://www.web-cars.com/corvette/1965-2.php)

If you are in the market for a '65 Corvette Fuelie that is ready to show or judge, this is it.

Take a look at the pictures below with slide show and feel free to click on pictures to enlarge.