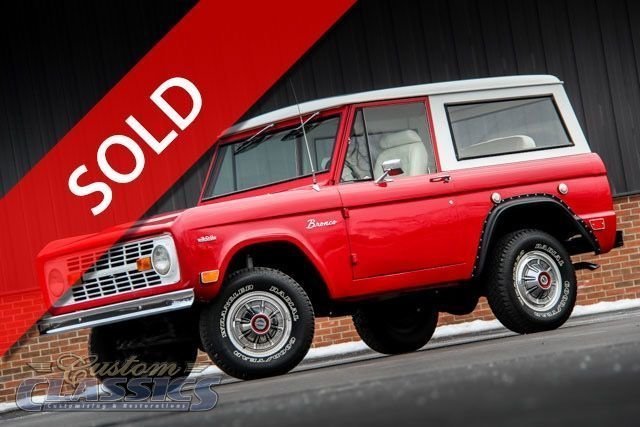 Custom Classics is proud to present this genuine 1969 Ford Bronco in outstanding condition. This truck has undergone a beautiful restoration using only the best available aftermarket parts for the Bronco today. The first generation of the early Bronco was built from 1966-1977 with a total of 225,585 produced, with only 19,200 built in 1969.

We discovered this truck in the wonderfully dry state of Arizona where it had lived for quite some time. The attractive two-tone exterior was repainted in a brilliant red two-stage base coat/clear coat paint for an impressive shine, with the hard top being refinished in white. Truthfully, this is an attractive truck that people really notice as it's cruising down the road… rest assured however, a more adventurous owner will find that this fully capable 4-wheel drive machine will also turn heads off the road — as a proper Ford Bronco should.

The Paint quality in the '60s was nowhere near as good as it is today, and trucks often got haphazard paint applications at best from the factory. Anyone that's still around from working at the Ford plant back in the day would be in total awe if they could see the quality finish of paint laid out today. The trim on this Bronco is retains is good condition to when it was originally restored. These trucks are now sought after by everyone from the younger generation to the guys in their 60's who remember them when they were new. Heck, the Ford Bronco is what I learned to drive in on my grandfather's cornfields in southern Illinois. As Noted by Hagerty Classic Car Insurance, the Ford Bronco and BMW Isettas are one of five classics you'd never guess are so valuable. “The humble 1966-77 Ford Bronco was a product of the same team that brought us the classic 1964½ Mustang. Unlike the Mustang, which sat on Ford Falcon underpinnings, the first Bronco was a totally unique platform. The size and shape were just right, and collectors have latched onto them in droves.” (hagerty.com) The Broncos continually are moving up in the market place and we've seen some great sales numbers at the auctions this past year. So not only is this '69 Bronco fun to play with… it's actually a good investment!

Mechanically, this little Bronco sports a 302 with a 4-barrel carb and electronic ignition that helps it fire right up. Remember that this is an extremely lightweight vehicle with 4.10 gears, so performance is lively under (or over) all conditions. It was designed to happily crawl over rocks and slog through marshes, so brute horsepower isn't necessary when you have the flexibility of a 2-speed transfer case. The engine is nicely detailed looking factory fresh from the air cleaner to the dual exhaust system. The engine is corporate Ford Blue, with some new hoses added and quality plug wires. The 302 has aftermarket headers on it with some nice sounding mufflers to give it that low rumble tone. The starter and alternator checked out fine as well as the manual 4-speed manual transmission. It was removed, and checked out for leaks and then reinstalled. Also, the alternator belt has been replaced and the power steering belt looks like it was replaced not too long ago. The battery was replaced on 03/2013 and still checks out strong. All in all, under the hood looks great and very close to factory correct.

The engine is backed by a 4-speed manual transmission and that aforementioned 2-speed transfer case. The front and rear axles feature 4.10 and 4.11 gears respectively, which is how 4×4s should be set up. The Bronco's innovative coil spring front suspension, which delivered a much more civilized ride than the leaf-sprung Jeeps and other early 4×4s, has been detailed and cleaned up with the rest of the underside as you can see in our photos. A solid chrome-tipped exhaust system gives the lively 8-cylinder engine the right tone. The brakes have been checked out, including the master cylinder; the shocks are also new units. The original 15-inch steel wheels have been refinished and are shod with raised white letter Good-Year Wrangler radials P235/75R15 tires that still have the nubs on the tread. You'll also notice the new hubcaps that were installed to give it that “new from the factory” look; even the rear spare tire received equal treatment. This solid truck has very little miles on it since it was completed.

The interior is equally spectacular as the rest of the vehicle. The white upholstery was standard equipment in some of the 1969 Broncos and nicely compliments the white two-tone top. A back seat was installed and the spare tire moved to the rear tailgate. An upgraded aftermarket steering wheel was added at some point in its life, but still looks pretty good. All the other parts are either good originals or restored pieces. The headliner is new, and so is the carpeting and floor carpet trim hold-downs. We also added a little touch of class with some tasteful “Bronco” aluminum door sill plates. The 4-speed trans slides effortlessly through its gears, while the T-handle shifter on the floor controls the transfer case.

During the restoration, the dash was repainted, and a new AM/FM CD Pioneer sound system was also installed. When the carpeting was out, the floor was coated with satin black Rustoleum to protect it from any moisture the truck may likely encounter in the future. This Bronco is also equipped with virtually every option Ford offered on the Bronco, including: heater and defroster, antenna, protective dash speaker grille cover, bucket seats, rear bench seat, ICC lamp flashers, padded black dash pad, sun visors, front and rear chrome bumpers, skid plates under both the fuel tanks and transfer case, 15-inch wheel covers,14 gallon main fuel tank, and an auxiliary 11.5-gallon fuel tank, as well as a 5-blade flex cooling fan. The truck retains its original appearance with rear fender flares only. However if you would like to customize the truck with fender flares up front, a set of restored front fender flares will be included in the sale for you (see "extra" photos for pics of them).

If you are tired of the barrage of Camaros and Mustangs at your local car show and are looking for a way to stand out and stop everyone in their tracks, then this is the truck for you. This Bronco is, indisputably, a true American icon that just looks like freedom on wheels. Don't miss your chance; this won't last long under our showroom lights.

1969 Ford Bronco Factory Specifications:
A few major changes were found in the 1969 Ford Bronco model as compared to previous model Ford Broncos. In 1969, Ford Motor Company introduced the new 302 V8 engine as a replacement for the popular 289 V8 option. Also, the door window frames were changed from a bolt-in style and now came welded to the lower door shell. Ford also discontinued the fold-down latch setup for the windshield to fold down (although the Broncos retained the windshield hinge which allowed them to still fold down when the top was off and the retaining knobs removed). Wiper motors on the 69 Ford Bronco were changed from dual vacuum motors to a single electric wiper motor with wiper transmission arms actuating the wiper arms. This provided a more consistent wiper assembly and allowed the wiper arms to run synchronized with each other. Also, the new electric wiper switch came in a dual-speed switch to allow for slow and fast wiper speeds. The grill was also changed to utilize larger turn signal buckets and the bucket lenses were changed from clear to amber in color. Also changing in 1969 was the rear hatch opening design. Extra supports were added to the top corners of the lift gate opening and beefier, lengthened side metal strips were added to the tailgate opening sides. Then a single seal was used to go from the bottom tailgate corner up and over to the opposing tailgate corner. This tightened up the rear hatch opening and made it much more quiet and well insulated.