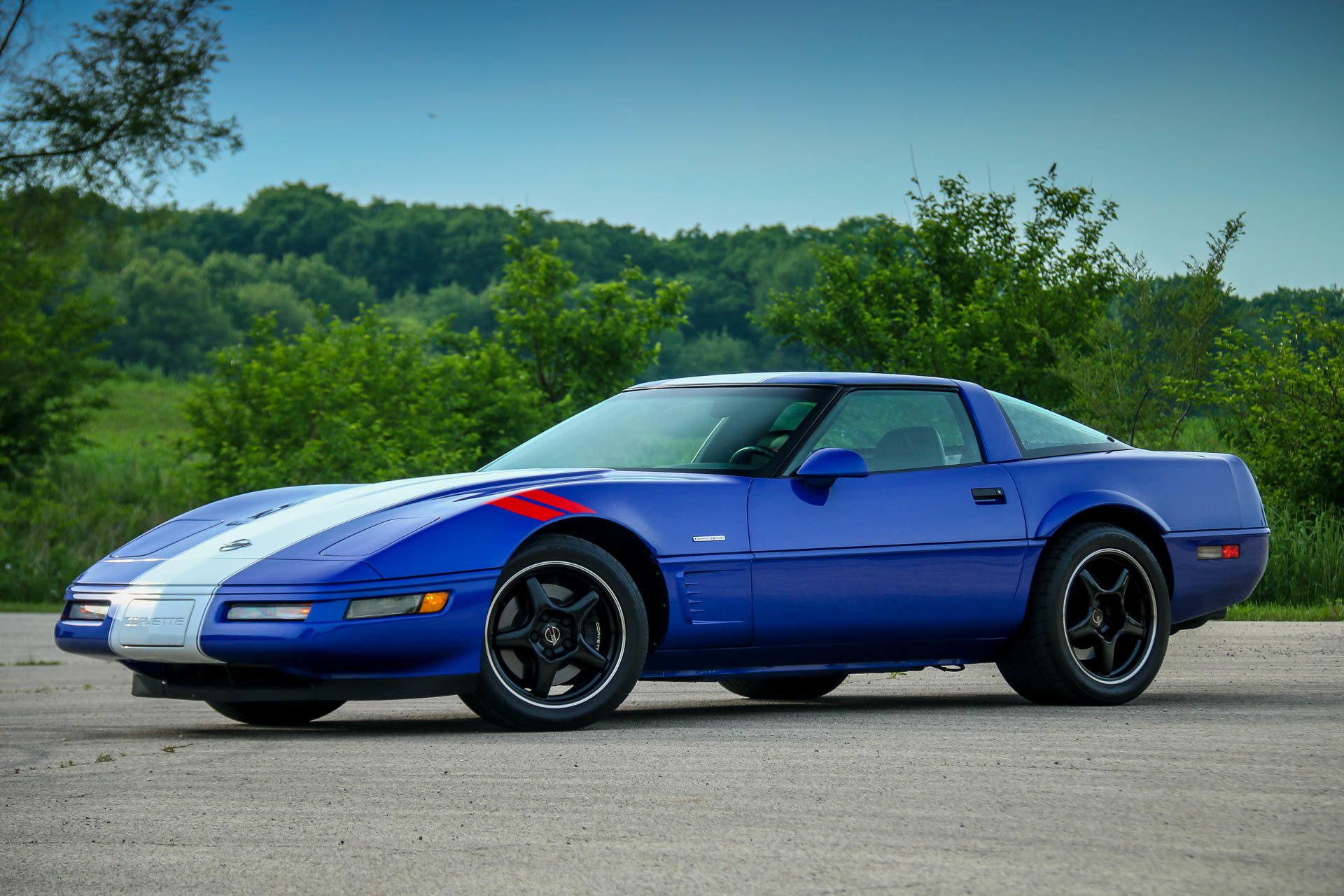 "Old names carry big weight in the Corvette world, mainly because Chevrolet, wisely, has never tossed around badges such as Z06, ZR1, and Grand Sport lightly. When you laid out for one of the special Vettes, you truly got something for your money: substantially more horsepower, for one thing, plus exclusive trimmings and maybe a pleasing retro paint scheme. People who buy Corvettes tend to like the fact that they're joining an old and illustrious family, and the 1996 Grand Sport plainly evokes the model's racing heritage.

A one-year gift to the Corvette faithful to celebrate the close of the C4's 12-year production run, the RPO Z16 Grand Sport option was collectible the minute the first of the 1000 examples—810 coupes, 190 convertibles—hit showrooms. Yes, for another $3250 above the Corvette coupe's $37,225 base price, you got more power, as the placard on the center console next to the six-speed shifter proudly proclaims. Besides calling out the LT4's 330 horsepower and 340 pound-feet of torque, the placard tells you in large type that the 5.7-liter engine has a 10.8:1 compression ratio, not a common stat found on an interior car badge.

After building Corvettes for four decades, the Chevrolet of the mid-1990s knew that its Vette customers like to quote figures because they get asked a lot.

You could have any color as long as it was Admiral Blue with an Arctic White “skunk stripe” down the center and twin red hash marks on the driver's front fender. The majority came with black interiors, but a few years ago, John Crynock—who owns two Vettes, this GS and a '98 Indy Pace Car Replica—pounced on one of the 217 Grand Sport coupes delivered with red seats. The C4 will rocket you back in time in terms of interior electronics and GM build quality, but the rumbling LT4 can still rocket you forward with equal ferocity. The view over the wide bat-wing hood has been and will remain a Corvette trademark, at least until the mid-engine Vette arrives next year to once again evolve the Plastic Fantastic.

Just 1000 examples built in one year means these cars are rare, fast, and distinctive. In a Corvette—in fact, in most cars—those factors add value. Plus, most Grand Sports were treated as collector cars from new, which means lots of low-mileage choices out there." - (via Hagerty.com)

Despite its long twelve-year production life, the C4 Corvette really only has two truly collectible models. There's the first generation ZR-1, a car that introduced a different flavor of sophistication to Chevrolet and continues to be popular today. And then there's the ZR-1's more exclusive sibling, the 1996 Corvette Grand Sport. The two cars share a lot of the same DNA, with the mighty Grand Sport benefitting from lessons learned during five years of ZR-1 production. But with only 1,000 units built, 810 of those being coupes, the Grand Sport is definitely the hotter collectible. Loaded with a long list of standard equipment including a 330 horsepower LT4 engine, this 1996 Corvette Grand Sport shows ONLY 21,906 ORIGINAL MILES and currently presents a virtually flawless original appearance. If you're in the market for a clean, unmolested Corvette that has serious collector appeal, this sensational C4 is the car for you!

The most striking feature of Chevrolet's C4 Grand Sport, is, of course, the paint job. I don't know what kind of favors John Heinricy and his crew had to promise to get it built, but 90s General Motors culture usually didn't let stuff like this see the light of day. The Admiral Blue base, a Corvette mainstay for many years, is a brilliant, vivid hue that seems to literally glow when it hits the sunlight. The stripes are Arctic White, another familiar Chevy color. And of course, the two bright red hash marks on the driver's side front fender are a hat tip to the historic Grand Sports that used red tape for identification on the race track. At any rate, this car has been beautifully maintained and, as you know, Grand Sports have been collector's items from the moment they were announced. By 1996 Corvette build quality was excellent, and the fit and finish on this Grand Sport suggest the guys in Bowling Green knew they were building something that would be remembered for decades to come.

The Grand Sport option in 1996 was $3,250.00
Beyond that bright paint, there's not a lot of detail work on this Vette. The car did get its own chrome badges on the front fenders, just in case you happened to miss said paint. GS coupes also received rear fender flares which were designed to cover 11 inch ZR-1 spec wheels, the largest wheels ever fitted to a C4 Corvette. Because of their obvious paint ridges, a lot of guys think Grand Sports are actually white cars that had Admiral Blue painted around their center stripes. But, in reality, vinyl secondary stripes, which border the car's main stripe, were created half Arctic White and half Admiral Blue to provide the illusion of paint ridges. Fortunately, even as decals, the smaller stripes are in excellent condition. The car's glass is all original and undamaged, and the circle markings you see on the hatch glass are the result of the polarized glass used to help control interior temperatures combined with the circular polarizer lens filter on our camera.

As I mentioned earlier, power comes from the best iteration of the second generation of Chevy's small block V8. Dubbed the LT4, and boasting 330 horsepower and 340 lb./ft. of torque (up 30 horsepower and 10 lb./ft. from the stock C4 Corvette's LT1), this stout engine is one of the most potent pushrod Chevy blocks to date. As with its body, this car's mill is dressed up in fine fashion, with a bright red intake manifold, a special throttle body, bright red ignition wires and a special plate with red lettering unique to its model. The car's engine compartment is in excellent condition, showing few signs of use and a very factory-correct appearance in every way. Like every other GS, the car is loaded with options, including A/C, power steering, and a traction control system that GM calls Automatic Slip Regulation (ASR). Those very clean ancillary components still carry all their original belts, hoses and decals. And since this Corvette is already a Bloomington winner, all it needs is preservation and excellent care to continue to be perfect in virtually in every way.

The only drivetrain available in the Grand Sport was a 6-speed manual transmission and a set of 3.45 gears. (As if you'd want anything else...) The Grand Sport coupe received a more aggressive suspension setup than its convertible counterpart, as well as those aforementioned extra-large wheels. The chassis on this coupe is well preserved and nicely detailed, showing only minimal usage befitting a car of its age and mileage. Its floors are clean. Its A-arms are still bright aluminum. I wouldn't be surprised to discover that the brakes still have their original pads and rotors. And speaking of aluminum, the car's awesome A-mold wheels, painted black with a machined lip --- one of the first times now familiar black wheels made an appearance on a production car, wear ZR-1-sized 275/40/17 front and 315/35/17 rear Goodyear GS-C performance radials that are original to the car. Impressive!

Two interior choices were available with the Grand Sport, black leather or red leather. But, not surprisingly, most enthusiasts chose black. With the bright colors on these car's bodies, an all-business interior made sense. And this Corvette's Ebony cockpit shows only minor wear that's certainly appropriate to its mileage. The Grand Sport-specific seats are extremely comfortable and, once you're settled into them, you're enveloped by a pure driver's environment. The combination digital and analog gauge cluster is fully functional, and despite criticisms of the time, has aged well and still looks cool. Things like automatic climate control, a powerful stereo system, power seats and windows, and just about every other feature you can imagine were standard on the Grand Sport. And you'll also find a reasonable storage area under the rear hatch.

The sale of this rare Grand Sport includes an original owner's manual, and original warranty booklet.

Despite one of its siblings being called the "Collector's Edition", the only 1996 Corvette that's worth owning as an investment piece is the super exclusive Grand Sport. Rare, documented, and highly desirable both then and now, the car represents a rare event at 90s-era General Motors --- the creation of a truly special platform that's more than just a paint and decal package. With the fantastic performance, stunning good looks, low mileage and excellent presentation, this awesome Grand Sport is certainly the investment to make if you're looking for a future collectible. So, drive it sparingly and enjoy the benefits of being a part of the most enthusiastic group of car guys in the world!

If you're looking to get yourself into a cool ride for the summertime, that will turn some heads without breaking your bank account, call us today 847-487-2272 to make this car part of your collection.