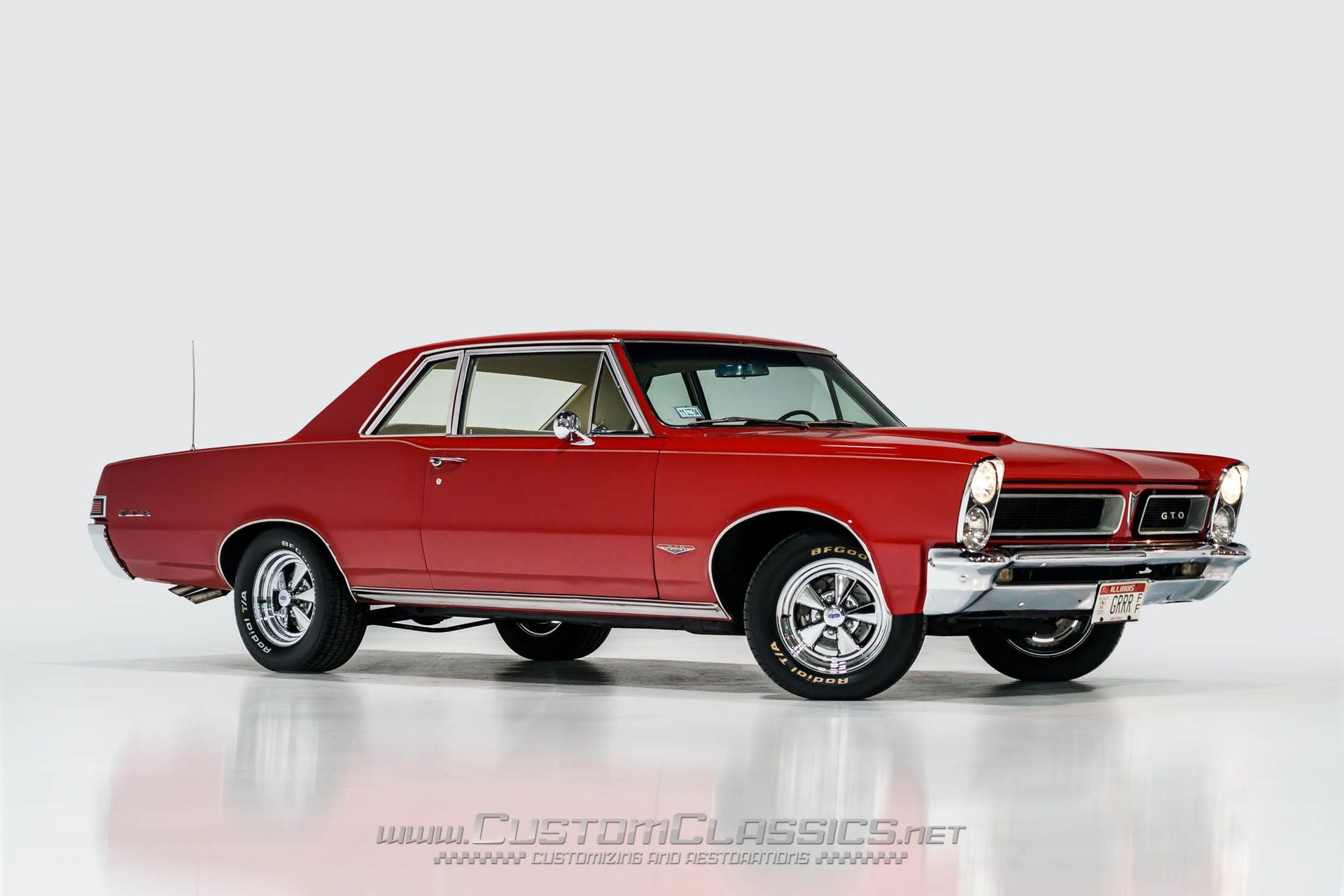 Get ready to rev your engine for this 1965 Pontiac GTO Custom 2 Door Post! This two-door Post features a strong, athletic styling that has become an icon of classic American muscle cars. If you're a fan of style, speed and comfort, you simply can't go wrong with Pontiac's storied GTO. The goat essentially defined the golden age of Detroit, and at the end of its first production run, it had become THE best-selling muscle car OF ALL TIME. Not surprisingly, demand for these cornerstone classics continues to be strong. In fact, the Pontiac GTO's are highly-sought after by classic car investors. Surviving muscle car models are rare, with certain models commanding prices rivaling vintage European sports cars.

The Pontiac GTO was built for the model years between 1964 and 1974 and was considered to have started the muscle car trend with all four domestic automakers offering a variety of competing models. This 1965 model is part of GTO's first generation. It comes equipped with options and features that are perfect for anyone looking to take a stroll down memory lane all while turning heads.

This beautifully restored 1965 example was born right in Pontiac, MI as a REAL tri-power 389ci V8 car with a 4-speed manual transmission in Montero Red — which is all correct, however this car along the way had its engine replaced with a period correct 389ci as one would expect to find in the car originally. This car comes with invoices that detail around mid to upper $20k range worth of work recently completed on the car by us here at Custom Classics last year including a full brand new Legendary interior and carpeting, brand new anodized aluminum beltline door moldings to match the excellent chrome on the car, new rear tail panel between the taillights, along with the mechanicals gone through to ensure this car runs and drives as great as it looks — and if you can't tell from the photos… it looks, runs and drives GREAT. (If you're interested in the invoices, they are available upon request.) Equipped with power steering and power brakes, these modern comforts will make this car particularly enjoyable as a fair-weather cruiser. The sale of this documented the car also includes copies of the Pontiac Historic Services paperwork. It is equipped with the highly desirable Gran Turismo Omologato (GTO) package, which included a potent 389 cu. in. V-8 engine, dual exhaust, sport suspension, chrome air cleaner and rocker covers, and GTO badging. The car was further upgraded with a four-speed manual transmission, three two-barrel carburetors, cluster & tachometer rally gauge, quick steering, transistor ignition, metallic brake linings, and Saf-T-Track differential.

This awesome '65 GTO with beautiful Montero Red paint is a documented, rare 2-door post sedan muscle car that features an ideal blend of performance and style. And thanks to its recent updating, it'll be an absolute pleasure to drive and show. If you've been patiently waiting for the opportunity to pick up a really high quality cruiser example of the ORIGINAL muscle car, here's your chance!