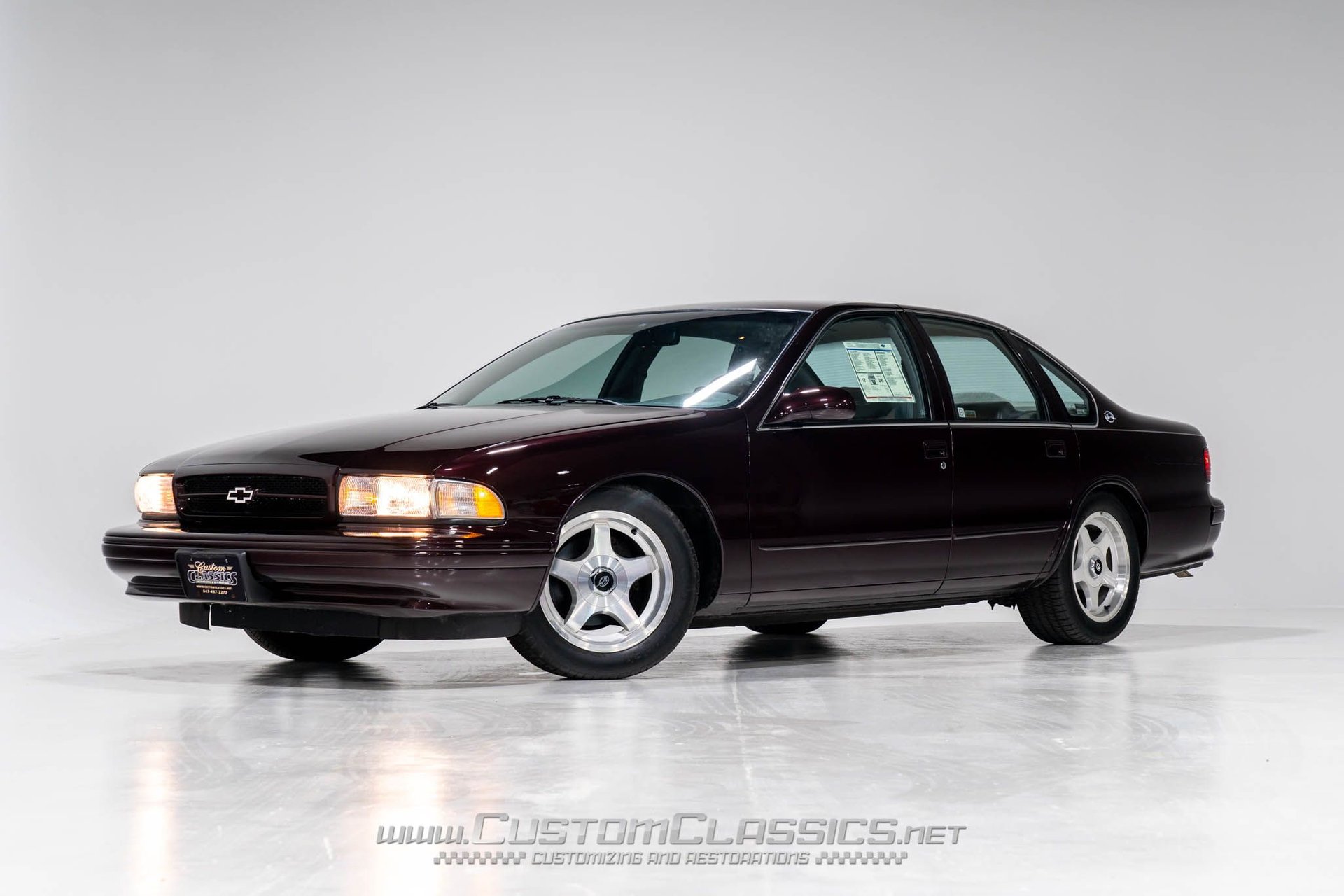 History of the 1996 Chevrolet Impala SS (via hagerty.com)

“Derived from the Caprice and built on the GM B-body platform, the 1994-96 Chevrolet Impala SS was first teased as a concept car at the 1992 Detroit Auto Show. The production version differed little from the concept and was produced at GM's facility in Arlington, Texas. It was equipped with the Caprice's 9C1 police package, which included such goodies as beefed up suspension, a high-capacity cooling system, dual exhaust, a transmission cooler and larger disc brakes. A limited-slip rear differential was standard, and the SS rode on 17-inch alloy wheels.

Under the hood was GM's 5.7-liter LT1 V-8 also used by the Corvette and Camaro. In the Impala, however, the LT1 had cast iron cylinder heads instead of aluminum as well as a different camshaft set up for usable torque rather than peak power and two-bolt main bearing caps instead of the four on the Corvette. Horsepower was 260, but torque was an impressive 330 lb-ft. At 4,300 pounds, the Impala SS was hefty, but it was lighter on its feet than it looked thanks to bits from the 9C1 package, and it would do 0-60 in seven seconds and the quarter mile in 15.3 seconds.

In 1996, a further 42,000 Impala SSs were sold, and revisions included a redesigned instrument panel with tachometer and relocating the shifter from the column to the floor. The car's days were numbered, however, as the whole B-body line was discontinued after 1996, making this the last of the rear-wheel drive Impalas.

These cars make solid, comfortable cruisers and they're quicker than most people would guess. After an absence of a few years, Chevy brought back the Impala for the year 2000 as a front-wheel drive V-6 sedan. There was an SS model, but most people see these 1994-96 cars as the end of an era.”

This particular model is a very rare car with the options it has (see window sticker photo.) With only 7,382 miles since new, this car is most likely one of the lowest mileage 1996 Impala SS's to exist. The beautiful Dark Cherry Metallic original paint is in VERY good condition as you may be able to tell from the photos and the combination against the Gray leather interior is highly desirable.

More information via rkmotors: “Leather was the only choice in the Impala SS and, in this classic, it remains in excellent, showroom-fresh condition. Naturally, part of the Impala SS package was embroidered logos on both the car's power-operated buckets and fixed bench. Straight-on, a pristine dash cages 1996-exclusive analog gauges above factory climate control and a factory stereo that's wired to a retrofitted, 10-disc CD changer. A 1996-exclusive console centers a simple shifter between a small armrest and a snazzy Impala badge. Padded door panels hug chrome buttons for power windows, power mirrors and power door locks that are sequenced to standard Remote Keyless Entry. And the driver spins a Camaro-style, Impala SS-exclusive steering wheel around a tilting column that's finished with standard Cruise Control.

While a Chevy this sinister couldn't have just any old engine, the show car's 500+ cubic inch big block just wasn't practical. Not to worry since GM usually has quite a few excellent V8s hanging around, and dipping into the Corvette parts bin for a few 350 cubic inch LT1s seemed a natural solution. The Impala SS-exclusive LT1 utilizes cast iron heads and a slightly tweaked cam to turn an easy 260 horsepower into 330 lb./ft. of quick torque. Of course, to make sure the car's accessories communicate with its fresh engine, Chevrolet had to install a higher output electrical system and a high capacity reverse flow cooling system. The result was a durable package that, routinely hammered by police forces and taxi drivers, is known for logging hundreds of thousands of miles.

That choice LT1 is backed by a reliable 4L60E 4-speed automatic transmission that's equipped with a factory transmission cooler. That transmission spins a limited-slip differential around mild, 3.08 gears. Holding that tough drivetrain in place is a larger-gauge frame that, along with this Chevy's sport-tuned suspension, was lifted directly from the Caprice's hugely successful 9C1 Police Package. Through the years, original, unmolested B-Body Impalas have remained rock-solid values.

And, as more and more of these classics are modified or just plain used up with much higher mileage, cars like this low-mile beast are poised to continue gaining value over time. If you've been looking for some clean modern muscle to show and have fun with, you'll be hard pressed to find a better car than this exclusive, final-year SS.”