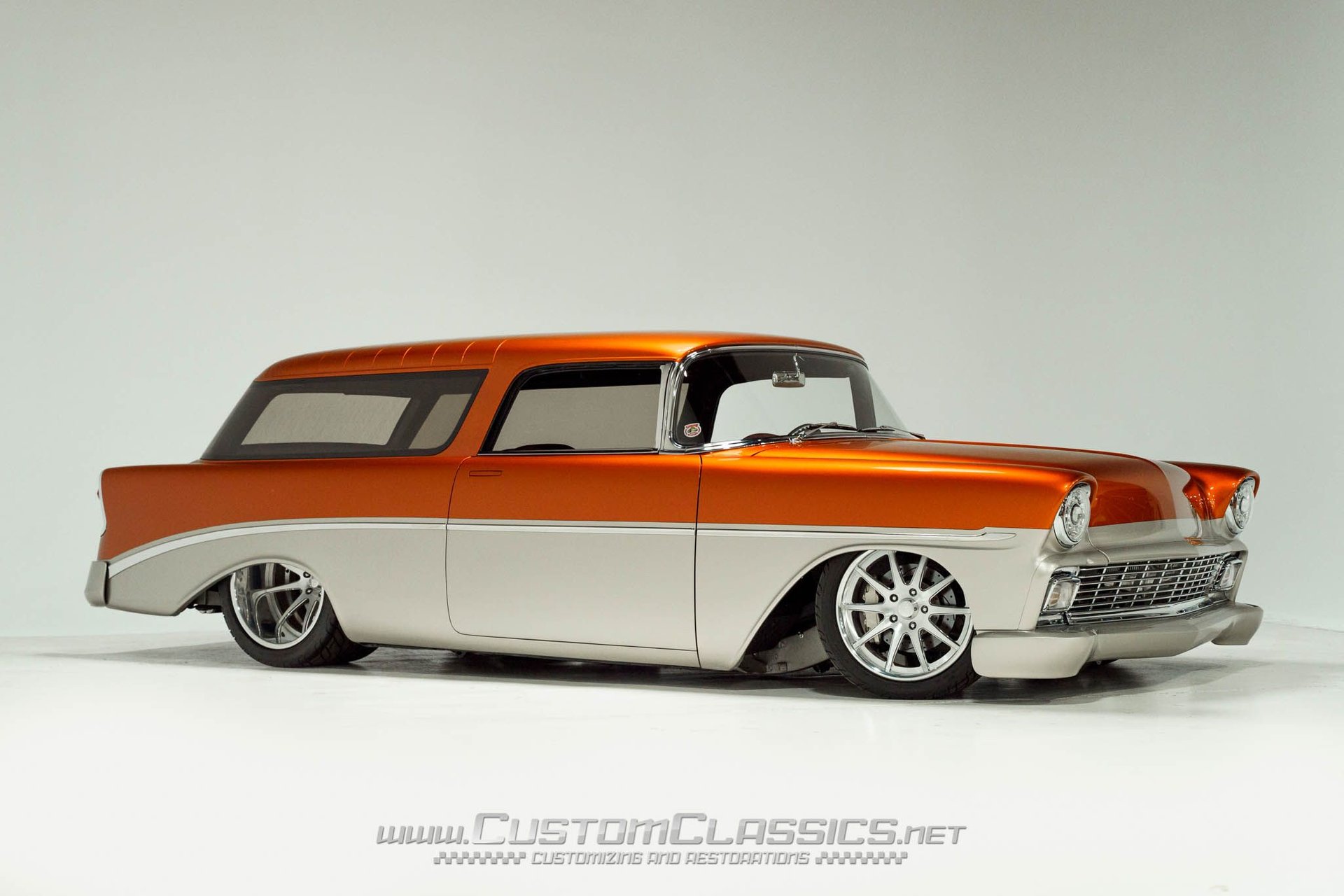 At Custom Classics, we sell some of the most exclusive classic cars and trucks in the world. But every now and then we still get classics that REALLY make our jaws drop and are just a ton of fun to own. In fact, when we first saw this awesome ProTouring Nomad pull into our shop, all we wanted to do was jump behind the wheel and head for the closest beach...and she SURE looks the part! And since this Chevy has been fully restored and equipped with a trusty LS3 and fitted with a cushy Relicate leather interior that's bigger than some people's bedrooms, it was more than willing to make the trip. Both rare and highly desirable, this timeless, all-American rig is one of the coolest people movers on the planet! And whether you're a diehard Chevy fan, a wagon enthusiast, or just someone who wants to drive something not often (or EVER) seen, it'll have you dreaming of the good old days and road trips with great friends and family!

"The Chevrolet Nomad made its debut as a Harley Earl Dream Car concept at the 1954 Motorama, and this one-of-kind 1956 twin-turbocharged Nomad packs performance and craftsmanship beyond even Earl's wildest dreams. The Nomad was designed and built by the team at The Restomod Store in Independence, Missouri, and the custom creation was featured in Hot Rod Magazine and Super Chevy Magazine. The Restomod Store pushed the factory custom Bel-Air well past the next level and hit the laser-straight steel bodywork with custom mixed orange and pewter DuPont Axalta urethane paint topped with hand-laid two-tone pinstripes. The shop's body and paint expertise earned the Nomad a spot in the DuPont calendar.

The Restomod Store expertise continues into the handcrafted custom leather interior. TEA's Seats designed and built custom front and rear buckets for the Nomad, and The Restomod Store team upholstered the cabin from the headliner to door panels and center console with distressed leather from Relicate. The mid-'50s meet the 21st century in the Bel Air wraparound dash. Dakota Digital VHX gauges, digital air conditioning, and heater controls, and a Kenwood touch-screen CD/DVD player with Hertz speakers. The one-of-a-kind Nomad waits for its next owner to settle in behind the tilt billet steering wheel, engage twin-turbo V-8 power, and roam the roads on Boze Alloys Traction Concave wheels and wide Mickey Thompson S/R tires
(26x10.00R18 fronts and 29x18.00R20 on the rears.)

Restored, customized, powerful, and ready to hit the road, this awesome Chevy is the perfect place to “See the U.S.A.” In recent years, Nomads have become extremely popular as more and more tri-five enthusiasts look for new ways to ante up and stand out. If you're looking for a wickedly cool collector car that's as functional as it is a head-turner, you're looking at your hot ticket! Call us today before this car goes... we promise it will NOT last long in our inventory.