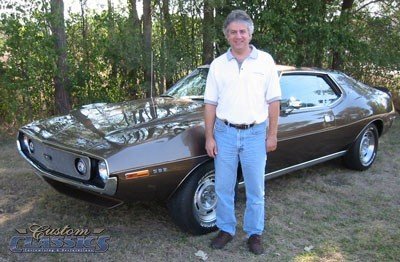 Did you ever want to kick yourself for selling that cool 1960's or 70's muscle car you once owned? Well, this is one that didn't get away.

Terry Weiner of Buffalo Grove, Illinois ordered this burnished brown metallic 1971 AMC Javelin AMX in January 1971. An American Motors offering, it then competed with the Mustang, Camaro, Firebird and Barracuda. But seven years of daily driving, 66,000 in mileage and long cold Chicago winters took their toll on this once robust muscle car.

“I found some cheap storage and put it away, but I always wanted it to look again like it did when it left the factory," Terry says. "AMC only made 2054 of these and you just don't see them around anymore.” He had the engine and transmission rebuilt and then started to collect the parts he would need to once again have it look showroom-new.

He chose Custom Classics to put it back together inside and out. Tackling body work, paint, suspension, driveline and interior, Custom Classics transformed this original owner's beauty to an American Motors Owners Association Gold Level Award winner. At its 2002 debut, this meticulously restored AMX captured both first place and participant's Best of Show award. At its 2003 return to the AMC Nationals, the Javelin once again took first place. This show quality restoration has gone on to win numerous local and national awards.

“It draws a lot of attention wherever we show it," Terry says. "I get a lot of compliments on the quality of the restoration." He has no plans to sell this valuable AMX restoration. “I can't. Not many people can claim to be an original owner after more than 30 years.”