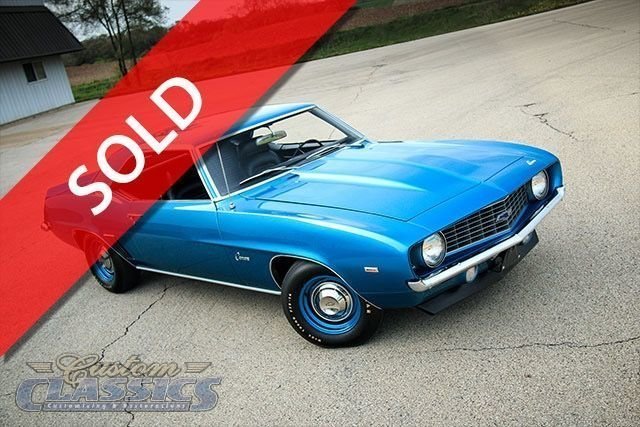 The 1969 Camaro is undoubtedly one of the most popular cars of all time. When new, it sold well and prices of perfectly restored examples are bringing big money.

It makes sense. Nearly every part to rebuild or restore these beautiful cars is available through the aftermarket. Many NOS parts also are available. You'll pay a premium, but that NOS quarter panel can still be found. While standard Camaros are certainly valuable, with many for sale, the real rare blue-chip investment cars have "COPO" figured into the equation.

COPO is an acronym for Central Office Production Order, and was the ticket to getting a souped-up Camaro with big-block power under the hood. Not just 396 power, but 427-cu.in. power with 425hp! There were several COPO designations, but basically, this meant there was a very limited run of non-standard vehicles… something you could not order from Honest Harry at Chevy Land in Anytown, U.S.A.

In 1969, there were three different COPO orders for a Camaro. Order #9560 and #9561 were almost the same cars. COPO #9561 got you an iron engine block. The third COPO # was 9737, which was the so-called Sports Car Conversion with either engine available, a 140-mph speedometer and 15 x 7 Rally wheels. All COPOs were emissions-certified, carried both the 12/12 and 5/50 warranties and were street legal, even with the noisy optional chambered exhaust systems, which essentially had no mufflers.

Unfortunately, due to the nature of their primary use-on the nation's drag strips and from stoplight to stoplight, many COPO Camaros were beaten to death or their original engines were blown and thrown away. But, a sizable number have survived. one of the most pristine examples and highest scoring cars in the nation is listed for sale here for you to own.

Because COPOs are considered Blue Chip investments by all muscle car collectors, for the foreseeable future their values will almost certainly continue to rise.

Custom Classics is proud to present what might be the Holy Grail of muscle cars: A documented 1969 Chevrolet COPO Camaro. It packs an original L72 427 engine, 512 block, original code BE rear end, and shows 95,021 original miles. It has been completely restored by Custom Classics and authenticated by Camaro expert Jerry MacNeish. If you've been tempted in the past but never quite pulled the trigger, you're going to be blown away by this LeMans Blue COPO.

We found this car in a barn up in Wisconsin in pretty rough shape… yes, a true “Barn Find.” This car, like many of these COPO Camaros, had been enjoyed and raced for several years. Once we purchased the car, it came here to Custom Classics and started its 3 year meticulous restoration process. There are many photos here online that are available for your viewing pleasure that shows all that was done to this car – and even more by request.

The first thing we did was hire Jerry MacNeish to fly out and authenticate the car before the restoration began. Jerry MacNeish has been involved with all national Camaro organizations, The United States Camaro Club, and The International Camaro Club and American Camaro Association acting as a Certification Concours Master Judge, Diamond Judge, and freelance writer. He is also heavily involved with the prestigious ICC Red White, & Blue Certification, and “Legend Certification” the two most extensive Camaro judging programs in the world! Meeting Jerry and getting his certificate of authentication that this was a real COPO Camaro was quite an honor. With Jerry's advise and help finding parts along the way the car was completed in about 3 years. Once it was done, Jerry was Hired to come back out and do a final inspection of the car. We also have his paper work that will go to the new owner, and is available for you to read and look over. Since that time, this Camaro has been to 3 Nationals and has scored a Gold Class 991 out of 1000 points at its last two events – one of the highest scores ever for a COPO Camaro.

On a car like this, it only makes sense to run down the numbers with all the clones and fakes out there, seeing a real COPO is a rare treat. To ensure that this is an investment-grade automobile, we have photographs of all the relevant numbers and castings, some of which are not visible after the car has been reassembled.

This 71 Code LeMans Blue coupe is about as sinister as they come. As a high-dollar investment-grade car, no expense was spared on the body and paintwork. Extensive care was used to retain as many of the original panels as possible and then straighten them to as-new condition. It is obvious that this car was never used too much as a daily driver, and the condition of every component is further proof that aside from pounding down the track, this car lived a realtively easy life. Two-stage urethane was used to finish the car and it looks spectacular from every angle. There's enough metallic to make it glitter, but the LeMans Blue is so rich that you have a hard time believing it ever looked this good coming out of the factory.

The COPOs were not known for ornamentation, and wore no outward signs that there was a fire-breathing 427 under the hood. Simple Camaro badges are on the fenders, nose and deck lid, but otherwise the car has no badging. This one carries an optional rear spoiler, but I'm fairly certain most COPOs had it since I've never seen one without it.

The original transmission, expertly rebuilt and restored by Advantage Transmissions is in place. Out back, there's a correct BE-coded 12-bolt with 4.10 gears and Positraction inside. The original floors were replaced and finished in correct satin black and not hidden under a thick layer of undercoating. The new floors are the perfect backdrop for the detailed driveshaft, lines, and hoses. The only non-original parts on the chassis are the rear leaf springs, which are accurate replacement pieces that are indistinguishable from original. This car also sports the correct chambered system that you find on all high-end restored COPO's. Personally we liked the sound of the chambered system, which tends to get a little raspy at high RPM. The wheels are correct XT-coded steel wheels and are original to this car, with NOS Chevy dog dish hubcaps in matching blue and reproduction Goodyear Polyglas tires.

Inside, you'll find the most spectacular and as close to perfect Camaro interior you've ever seen. Look at the detailing on the seats and the rest of the interior car… every part of the interior was restored with exception of the dash cluster. The trunk is completely restored with spatter finish paint, a correct mat, and full-sized spare and jack.

Documentation, as you might imagine, is extensive. We have all the photos from the restoration, which also show the vital casting numbers and stampings that you can't see any more now that the car is assembled. We also have a pile of receipts for all the restoration work. Then there's the certificate from Jerry MacNeish himself, which authenticates this COPO as the real deal and Jerry himself said of this car that it was one of the cleanest, and one of the finest restored COPOs he's ever seen and inspected. To top that off, we have had Jerry MacNeish re-inspect the car and an updated, post-restoration authentication report is available. This is the best of the best folks… don't miss out on one of the most sought-after, blue chip investment grade Camaros out there… the 1969 COPO Camaro in LeMans Blue.

For more information about this car and to view more pictures and documentation, call Bryan at Custom Classics to discuss this car. We have many many pictures on hand of the complete restoration, as well as the Concours Gold, Bloomington Gold, Certificates, and numerous other awards the car has won.