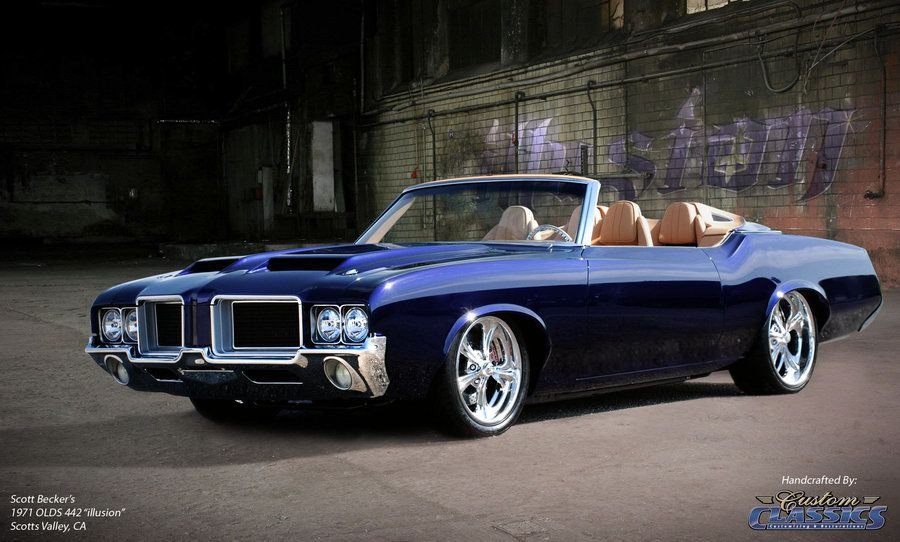 Story from Street Scene Magazine - "The Oldsmobile “Illusion” project started back in 2003 as project between a father and his two oldest sons. In late 2000 I went through a divorce and was looking for ways to spend time with my older children then 13, 10 and 7. My seven-year-old daughter had little interest but the older boys were very into cars.

One of my best friends Jim Hogan suggested that I find a car that the boys and I could work on. When I was in college I had a 1971 Olds Cutlass coupe with a 350 and a 2-barrel carb. I remember the torque and performance of the car to this day. The older Cutlass' are still one of my favorites. I decided that it would be special if the boys and I could find and restore a Cutlass for us to drive around in. Early in 2003, I found what I thought was a pretty nice '71 Cutlass convertible in Tennessee. So my new wife Jackie and I along with our 2-year-old son went for a road trip. We attached a rented car trailer onto our truck and off we went driving the 10 hours between Chicago and Tennessee. We picked up the car and headed back to Chicago. On the way back to Chicago the rented car trailer got a flat tire. The trailer did not have a spare so we had to call the rental company and waited several hours for them to come out and fix the tire.

I have little experience working on cars but thought that it would be fun for the boys and I to learn together. Since the heart of the car is the engine we started there first. I did some research on the web and found a specialty Olds performance site operated by Joe Mondello. I called Mondello and told them that we wanted to build an engine from the parts. A few weeks later the parts arrived in a crate. We were excited and started assembling the engine that day. With micrometer, assembly lube and an engine manual we put the engine together.

While the engine waited on the engine stand we attacked the restoration of the rest of the car. We ordered parts from Summit Racing and YearOne thinking that we would do quick restoration on an already nice looking car. We started with suspension, brakes and fuel delivery. Shortly thereafter we were ready to install our engine in the car.

Soon we had the engine and electrical systems connected and we were ready to start the car. With the help of Jim Hogan who was visiting from California and our other friend CONTACT _Con-3B85229F14D Al Liermann, we got the car started. I can still remember the excitement that we felt as we smelled the un-burnt hydrocarbons of a 70's vintage car. We piled into the car and took it for a ride around the block.

Soon after getting the car running we decided that we wanted to upgrade the paint. Having had the experience of painting my first '71 Cutlass in my parents garage (overspray on everything including my mom's curtains), I decided that it was best to let a professional handle the job. Utilizing the Web I randomly selected Custom Classics in Island Lake, IL. Once again we loaded the car on the trailer and brought it to Custom Classics. I met the owner CONTACT _Con-3B85229F12B Bryan Reehoff and we talked about what I wanted.

Once Bryan got a hold of the car and stripped the paint, things changed dramatically. Underneath the paint was shoddy bodywork that covered a bunch of rust. The body of the car was removed and Bryan found that the body bolts had rusted through and the frame was bent from a previous accident. At this point we decided that the best thing to do was a frame of rotisserie restoration and turn the car into a G-Machine.

My good friends will tell you that once in a while I tend to go a little overboard on my projects. What started as a simple restoration in 2003 went to a G-Machine and finally to the Pro-Touring car that you see in the pictures. Bryan and myself dreamed up the concept of the car with the help of a young designer named John Caswell.

There are only a few of the original parts remaining on the car. The body, frame, rear differential, bumpers and front grille are from an original Cutlass. The car has too many custom elements to list them all. They include the very first whole car electronic touch-control system by ISIS, 4” polished stainless steal exhaust, custom engine and engine compartment including a nasty air cleaner cover with ghost flames, custom interior covered in Ferrari leather including a custom dash and center console, AirRide suspension, shaved door handles, Vintage Air, custom fiberglass convertible boot cover and a high end stereo with 3 video monitors. The engine has many polished aluminum parts including the intake manifold and March pulley system. We took the engine that the boys and I built to a race engine company in Joliet, IL to make sure that we didn't mess anything up. The engine dynoed at over 500HP and 570 ftlbs of torque. Not bad for a first time effort.

On the weekend of July 18th, 2009 my older children and I met in Minneapolis to see the completed car for the first time at the CarCraft Nationals. The car was only car show ready and not quite in its finished form. The car will be complete in September 2009 and we are looking forward to participating in many car shows and enjoying the beautiful ride that we created.