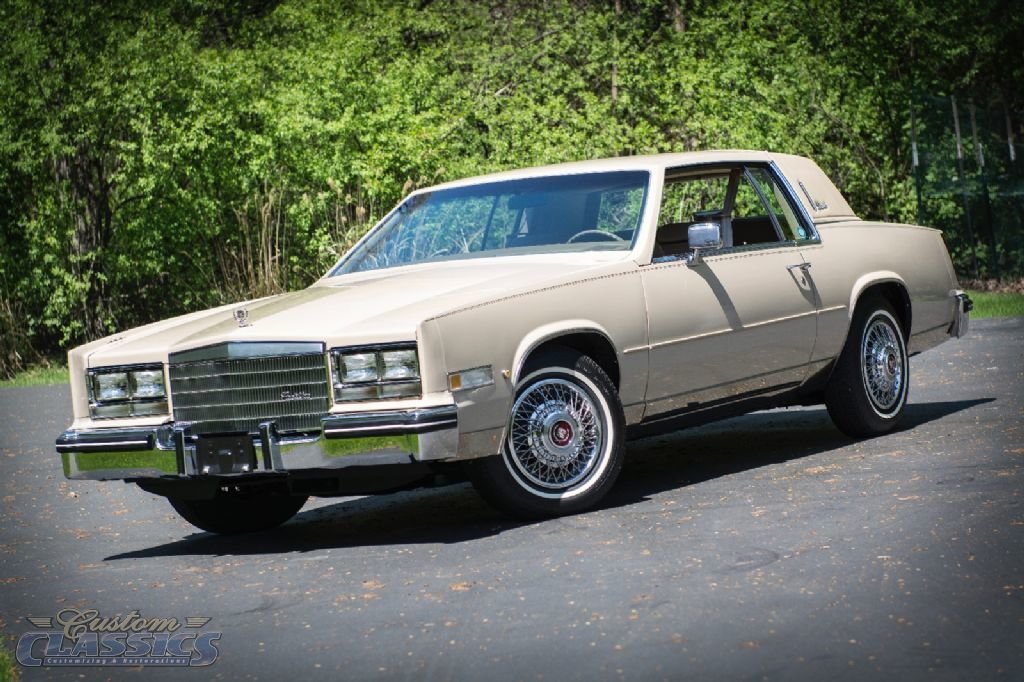 Great Scott! Movie audiences everywhere in 1985 were enraptured with a little film known as 'Back to the Future' that had just come out on the silver screen. For the two or three who don't know, the story centers on a certain spunky Marty McFly, his scientist pal Doc Brown and a time-traveling, imagination-stirring Delorean. Fast-forward to today and prospective buyers are having their mind blown by another head-turning vehicle; this 1985 Cadillac Eldorado. Science has come far but not enough to transport you back to '85 as fast as this Caddy can. The rolling time capsule is pristine, showing a scant 3,700 miles on the odometer. It's not that it just sat forgotten in some dusty, dirty warehouse and never moved. Far from it! This classy cruiser has been thoroughly babied and properly taken cared for it's entire thirty-one years and always staying in climate controlled storage. The condition is so good, frankly it could be rolled right back into a swingin' 1980s Cadillac showroom and no one would ever know the difference. If that's heavy for you, it should be. Finding dang to close to perfect examples like this is harder than coaching the Chicago Cubs to a World Series victory.

The story goes that the Eldo was sold new at Francis Cadillac in beautiful Mount Prospect, Illinois. A husband and wife bought matching 'his' and 'her' Eldorados on the very same day to celebrate their recent retirement. This one was the 'her's and never driven, as the couple opted to regularly drive in the other car. Because of that, it's stayed in immaculate condition. There's not a ding, scratch or blemish anywhere on the Sandal Wood tan paint or its sparkling chrome and brightwork. A touch-up brush? Never ever been close to touching this rolling beauty. The couple spared no expense when they picked out this car from the dealer's lot. The price tag rang up at a hefty near $25,000. High-end options abound including such things as locking wire dish wheel covers, dual vanity mirrors, opera lamps, door edge guards, a cabriolet roof, tilt and telescoping steering wheel and a digital dash. The car was heavily loaded but oddly enough didn't contain one key feature: a passenger six-way power seat. The option was available at the time and the driver's seat had it but it wasn't found on the passenger's side. The couple had the dealer install it so both husband and wife could ride in cushy style.

Underhood there's no flux capacitor but rather a HT4100 V8 with a very rad Digital Fuel Injection setup. Power gets to the road via a four-speed transmission with electronic overdrive. That massive squared-off engine compartment is neat and tidy and won't disappoint when opened at car shows or cruise nights.

Inside, everything is plush, swanky, classy and a whole host of other words that just mean plain comfy and luxurious. The dreamy toffee theme continues with Sandal Wood tan leather covering the seating area. Rubber backed mats with deep carpeting have protected the footwells and the interior is just as immaculate and marvelous as the exterior.

Everything on the vehicle is original, right down to the tires. The sole items that have been replaced is the battery (changed just last week) and the oil and filter during maintenance services. The car's quality speaks for itself and is readily evident to a very discerning bunch: car show judges. At the 2010 Lake Forest Car Show – at the time it was the oldest continually operated Antique Automobile Club of America sanctioned show in the nation, the Eldorado garnered 100 points. In June of 2008, it won a Bloomington Gold Survivor for all brands award at the event, which was held in St. Charles, IL. Naturally, all judging sheets will be included as part of the purchase.

The Caddy drives exactly like when it was new and just what you'd expect from a luxury ride of the era. It's a unique boulevard cruiser that won't just turn heads with it's edgy, squared off styling but with it's remarkable pedigree and unheard of condition. The values for these kind of classy Caddys are on the rise and you can expect more of that to come in the very near future.