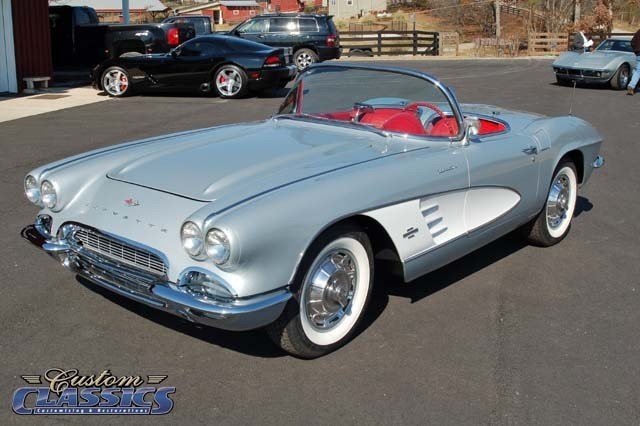 Rochester Fuel Injection System Code # 7017320
In Late 1960, a newer plenum design with improved airflow was introduced. This unit had a smooth top with no ribs and was #7017320. This continued through 1961 on high horsepower cars.

ONLY 747 cars were built with the Sateen Silver Exterior with either Blue/Black/Red and either a White or Black Convertible top.

ONLY 159 cars were built with the Sateen Silver/Ermine White two-tone color combination.

A little more information about the 1961 Corvette:

A freshened rear design was the most pronounced external change for the 1961 Corvette, a kind of "ducktail" design that had been lifted virtually intact from Mitchell's Stingray racer and also used on his XP-700 show car. Besides improved aesthetics, the new posterior brought a practical bonus: luggage space (such as it was) increased by around 20 percent. The new tail also sported a pair of small round taillamps on each side of the central license-plate recess, plus a modest longitudinal trunklid creaseline running through the traditional, big, round Corvette medallion. Simple chrome bumperettes bracketed the license plate, which itself gained a small "arch" bumper. And for the first time, the dual exhausts exited below the body rather than through it or the bumper guards.

The 1961 Corvette had a shapely new "ducktail" that mated nicely with the existing four-lamp front. On the leading end of the car, Mitchell crafted a cleaner version of the existing four-lamp nose. Headlight bezels were now painted body color, and the trademark vertical teeth were jettisoned in favor of a fine, horizontal-mesh insert finished in argent silver. The round medallion gave way to separate block letters spelling out the car's name, topped by a larger version of the Corvette's crossed-flags insignia. The 1961 would be the last Corvette available with bodyside coves in a contrasting hue, a mere $16.15 option that most buyers ordered. Even the fiberglass exterior's build quality was improved, as the car's fit-and-finish for 1961 was the best yet.

Carrying a base price of $3,934, standard features now included windshield washers, sunvisors, a thermostatically controlled radiator fan, and a parking-brake warning light. A heater was still optional for 1961, however, priced at $102.25. While air conditioning, power steering, and power brakes still weren't offered, the "Wonder Bar" signal-seeking AM radio remained available, as did the Positraction limited-slip differential, "wide" whitewall tires, electric windows, and the power-operated top. Nearly three-quarters of all Corvette customers that year gladly paid $188.30 for the four-speed manual transmission, which was now clad in aluminum, trimming 15 pounds from the car's heft.

Within the two-seat cockpit, the only change for 1961 was a narrower transmission tunnel that afforded a bit more interior room. Four interior color schemes were available: black, red, fawn, and blue.

The 1961 Corvette had a cleaner look that was appreciated by buyers -- sales rose to nearly 11,000 for the model year. Mechanically, the 1961 Corvette was much like the 1960 model. However, an aluminum radiator took the place of the previous copper-core unit, which not only improved cooling capacity some 10 percent, but weighed half as much as before -- which was another weight-saving improvement. Side-mount coolant-expansion tanks were added as a running change. Engine choices were basically carryovers. There were still five versions of Chevy's renowned 283-cubic-inch small-block V-8: 230, 245, 270, 275, and 315 bhp, the last two being fuel injected. The three-speed manual remained the standard gearbox but was now offered with a wider choice of axle ratios. Powerglide automatic continued as optional, but was now unavailable with the three hottest engines.

Even with the mildest 283 and Powerglide, the 1961 Corvette was quick by any standard: Magazine testers recorded 0-60-mph acceleration between 6.7 and 7.7 seconds. Top speed with the automatic was listed at 109 mph and was limited mainly by gearing. The four speed lacked the long-legged overdrive ratio of most modern five-speed manuals, yet many of the fuel-injected and twin four-barrel models could reach in excess of 130 mph.

Although Corvette didn't yet have an independent rear suspension like some costlier European models, this didn't seem to hurt the vehicle on either the street or the track. Testers sang the praises of the 1961's handling virtues, and almost none of them discerned any particular deficiencies. By the standards of that day, the Corvette was now one of the most roadworthy cars in the world.
(http://auto.howstuffworks.com/1961-corvette.htm)

If you are in the market for a rare '61 fuel-injected Vette that is ready to show or judge, this is it!

Take a look at the slide show below and feel free to click on the pictures to enlarge.