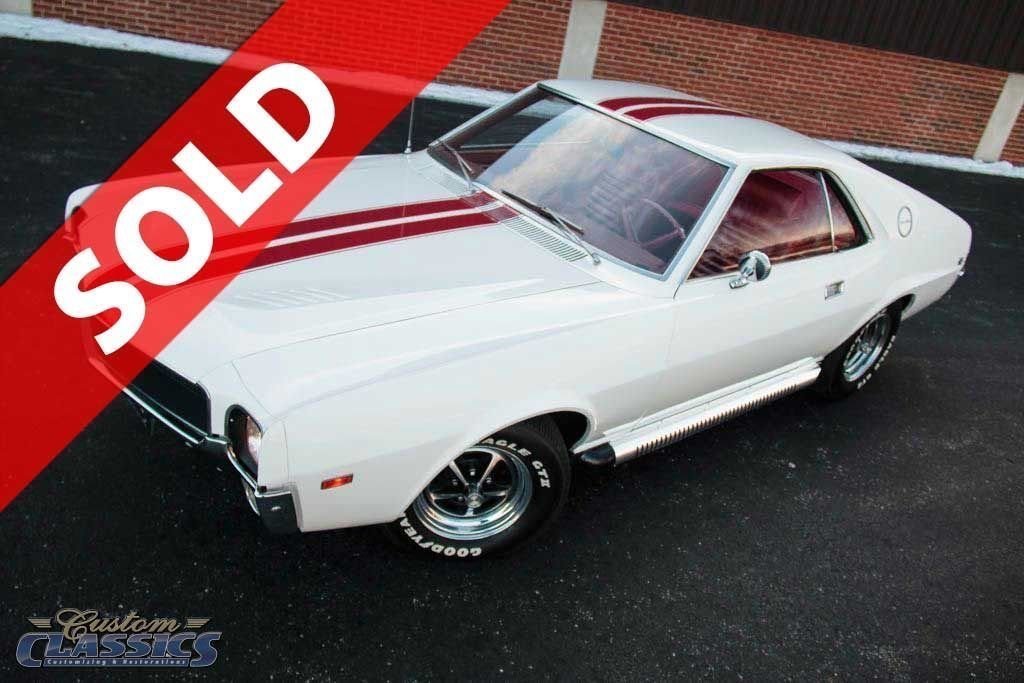 Much cleaner than when it originally rolled down the Kenosha, Wisconsin assembly line, this slick little coupe has been transformed into a restored classic beauty that shines well at any show. The car was finished in Frost white paintwork, which has been applied over a very clean body. There are no signs of rust or rot, suggesting that body was a straight, trouble-free canvas before its metamorphosis began. Not surprisingly, panel gaps are good enough to make the red stripes line up exactly right. And overall, the car is so well done that many unsuspecting bystanders will be fooled into thinking this is how it roared right off the showroom floor.

Championing what some consider the perfect blend of muscle and sport, the AMX's tidy dimensions belie its outsized presence. Aimed directly at the Chevy Corvette from a performance standpoint, AMC took a much more flamboyant approach when it came to appearance. At the front of the car, a flush, 1968-exclusive grille posts a clean "AMX" to the left side between those large headlights, ornate parking lamps, and a heavy chrome bumper. Alongside that bumper, it flows into tall body panels that are detailed with checkered "390" emblems and Trendsetter side pipes. Opposite those pipes, a 'power blister' hood anchors lightly nontinted glass between the straight stainless trim and massive "AMX" emblems. And behind those emblems, 1968-exclusive tail lights center an "AMX" branded reverse lamp between a small American Motors badge and second chrome bumper.

Lift the long white hood and you'll find a 1968, 390 cubic inch V8 that creates a respectable 325 horsepower. At the top of the blue block, a functional Go Package rams air into a polished filter case and a 4-barrel carburetor. Below that carburetor, a correct intake feeds the 51cc heads that are fitted with attractive chrome valve covers. Sparks are sequenced through 7mm Standard wires via a familiar points distributor. Opposite that distributor, fully restored exhaust manifolds shoot charred exhaust into the rowdy, true-dual side pipes. And, at the front of it all, a heavy duty radiator. This AMX's clean engine bay is a nice combination of form and function, featuring reproduction decals, a snazzy AM washer reservoir, and a big brake booster. And everything from the car's fenders to its firewall is coated in excellent white paint.
Take one look under this sporty coupe and you'll find a fully sorted chassis that's certainly equipped to back up the car's sinister good looks. an original Borg Warner AS6-12 3-speed twists torque to a positraction rear end. That smooth drivetrain feeds a nice front and rear suspension, that appears to be in good tight condition The Cool and confident stops are provided by Safe Command power front disc and rear drum brakes. Above that impressive hardware, solid floors have been properly undercoated; instead of polished in a nice shade of body-matched basecoat like so many over-restored classics that roll through our showroom. At the corners of those floors, rare Machine wheels spin p215/70R14 Goodyear Eagle GT's around stainless trim rings and detailed center caps. And a thorough examination of all the car's bushings, lines and hoses ensure it has the roadgoing reliability that matches its eyeball-popping curb appeal.

If you're like me and prefer your muscle cars flashy, you'll definitely appreciate this AMC's correct Red interior. The car's clamshell perches are firm to the touch, featuring pliable Vinyl covers that present themselves very well. In front of those seats, a 1968-exclusive dash hangs a great set of gauges, a radio and the climate controls in a broad swath of red applique. Below that dash, a Shift-Command shifter rides top-dead-center on a correct, red console. At the base of that console, fade-free carpet is protected by red carpet floor mats. At the sides of that carpet, red door panels sprinkle more wood trim amidst bright chrome hardware. In front of the driver, a 3-spoke Rim Blow steering wheel spins a large silver rim around three patriotic horn buttons. And behind the front passengers, a fully restored trunk hides a correct Space saver spare tire, and inflator.

So if you're looking for something that stands out of the normal Camaro / Mustang crowd, here is your car. These sporty little Go Pac AMX Cars use to give those other muscle cars a run for their money, without costing its owner a ton of money. Now's your chance to grab on to a piece of true Muscle car history without costing you a fortune. Contact our sales manager Gary at 847-774-9855, and he can help get you into this little beauty before someone else gets it out the showroom doors before you!

It's not just hype when we say you need to call right away on this awesome AMX. Compact, big-displacement muscle cars are as exclusive as they are fun, and every time we put a well-restored AMC in our showroom, our phones start ringing off the hook. Take a good, long look at the body, drivetrain and interior on this sporty coupe. There's just no way you could build something like this and not significantly overshoot our asking price. Don't be that guy who calls late and asks: "Is it really sold?" Pick up the phone and act now!