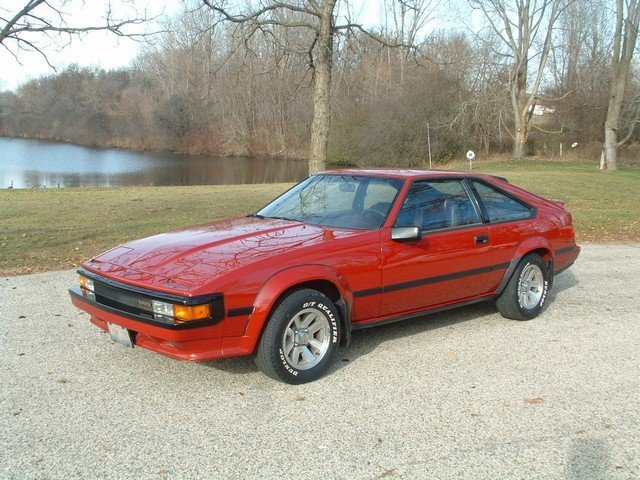 SORRY THIS CAR HAS BEEN SOLD

1985 TOYOTA CELICA SUPRA MKII
This is a two owner car, that spent most of its life in California. The car was purchased new at Victory Toyota in Palos Verdes Est California. It was put into service on June 21 1985, and the owner took it off the show room floor with 41 demo miles on it. The 2nd owner then moved from California to Northwest Illinois where the car has been ever since. It was never driven in the Northern winters, just used as a summer car. That is why, as you can see the body is in immaculate condition. Even the bottoms of the doors and rear hatch-back are rust-free in the seams. There are close up pictures of the original alloy wheels, and they are in above average condition.  The car runs and drives great, and the second owner says it's never missed a beat.
The interior is in good condition with your normal leather wear & cracking. The radio still works great and so does the power antenna. The right and left power mirrors work great too. Power flip-up head lights work and so do the fog lights. It appears that everything in the car works well including the seat blow-up bolster on the drivers-side seat. I have the original owners manual and the service / owners guide. Call and ask for Bryan at 1-847-487-2272 or you can e-mail me at bryan@customclassics.net.

The Supra was altered again in 1985. On the engine side, power output was increased to 161 hp (120 kW) and 169 lb·ft (229 N·m) of torque. The good news was that all Supras this year had that same amount of power (both automatics and 5-speeds). The engine received a redesigned throttle position sensor (TPS) as well as a new EGR system and knock sensor. With the slight increase in power the Supra was able to propel itself from 0-60 mph in 8.4 seconds and netting a 16.1 second quarter mile at 85 mph (137 km/h).

Other changes would be a redesigned, more "integrated" sunshade and spoiler on the rear hatch. The rear spoiler was changed from a one piece to a two-piece spoiler. Oddly the L-types of this year were not available with a leather interior, but P-types were. Toyota added a standard factory theft deterrent system and the outside mirrors were equipped with a defogger that activated with the rear defroster. All Supras this year received automatic-off lights that also encompassed an automatic illuminated entry and fade-out system.

While 1985 was to be the last year of the second-generation model, delays in production of the third generation model led to a surplus of second generation Supras. During the first half of 1986 the 1985 MK II P-type was still offered for sale, with only minor cosmetic changes as well as the addition of a now mandatory rear-mounted third brake light on the hatch. These were all labeled officially as 1986 models. P-types were the only model available in 1986.