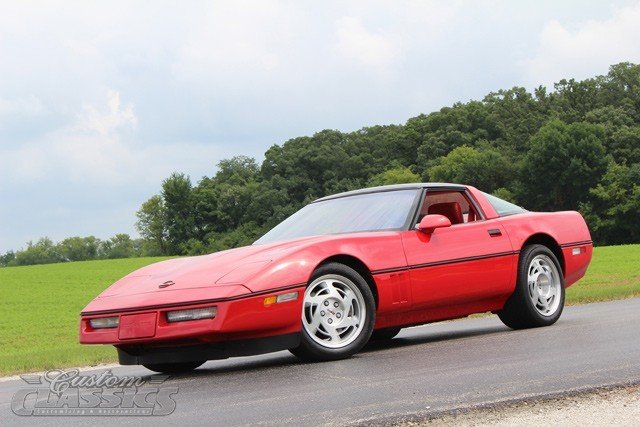 *Sorry, this car has been SOLD. If you would like a very similar car, we do have a 1990 Corvette ZR-1 in BLACK with 2,300 original miles as well. Contact Us if you are interested.*

This is a ONE-OWNER, 2,384 ACTUAL MILES car! The 1990 Corvette ZR-1 has been legendarily known as the "King of the Hill." Now is your chance to own this all original Corvette ZR-1 with incredibly low miles in the perfect color combination: Red on Red. Car comes with both tops as well as the ZR-1 promotional "Pizza Box" that holds all the manuals and even a promotional video! The best part about this car is hands-down the amazing LT5 motor. This motor is the reason that there are very few ZR-1's with low mileage... once anyone drives this car and feels the power of the LT5, it is very hard not to want to continue driving it. However, the owner has preserved this ZR-1 and kept it in the same condition as it was when it was in the show room. All ZR-1 Corvettes were equipped with the Borg Warner T-6 six-speed manual transmission, the Selective Ride Control system which allowed driver control of the suspension, Bose stereo, air conditioning and basically, every other Corvette option. Corvette experts agree that these cars are on their way up in value, rightfully taking their place among the great Corvettes of history. The day is not too far away when the well-preserved, low-mileage ZR-1s will be attracting the same kind of smart buyers as the legendary split window coupes, the L89 big blocks, and the early 6-cylinder roadsters.

A little history on the ZR-1:

CORVETTE ZR1: IT'S GOOD TO BE THE KING

Few new cars have ever caused the stir that whipped up around the 1990 Corvette ZR-1. It started with fuzzy spy photos and Detroit gossip about a high-powered, “King of the Hill” model. Chevrolet was coy, neither confirming nor denying the grist of the rumor mill.

Rumor became fact at the 1989 Geneva Auto Show, when the ZR-1 officially debuted. It was a time when performance cars were only beginning to regain some of the performance enjoyed during the heyday of the muscle car, and the ZR-1's 375-horespower (280 kW) LT5 V-8 engine – with its DOHC configuration and four-valve heads – was an intoxicating breath of high-octane excitement.

The all-aluminum LT5 engine's design was a collaboration of GM and Lotus Engineering, sharing only a 5.7-liter displacement with other small-block engines. The engine was built by Mercury Marine, which was renowned for its aluminum machining capability. Engineers were justifiably proud of the LT5's refinement and smoothness; so much so that it was claimed a nickel placed on its end on top of the engine wouldn't fall over when the engine was started. The challenge was immediately taken up – and the LT5 roared to life while the nickel remained standing.

The ZR-1 was more than merely a more powerful Corvette – it was a complete performance package that included wider rear bodywork to accommodate humongous rear tires and a unique, convex rear fascia with rectangular taillamps that made the car recognizable at a glance. The distinctive exterior elements contributed to the car's mythical status among enthusiasts and auto critics. At its launch, the ZR-1 was found on the cover of just about every automotive publication around the globe, with Car and Driver dubbing it the “Corvette from Hell.”

Proving the ZR-1's performance lived up to its instant legend status, a production model was sent to a high-speed test track at Fort Stockton, Texas, and set seven world speed records – the most notable being a 24-hour endurance run that averaged 175.8 mph (283 km/h) and recorded more than 4,200 miles.

During 1990, the premium ZR-1 recorded 3,044 sales. Subsequent model years didn't quite match the buzz created by that first year, even with a horsepower increase to 405 (302 kW) in 1993.
source: www.corvettemuseum.com