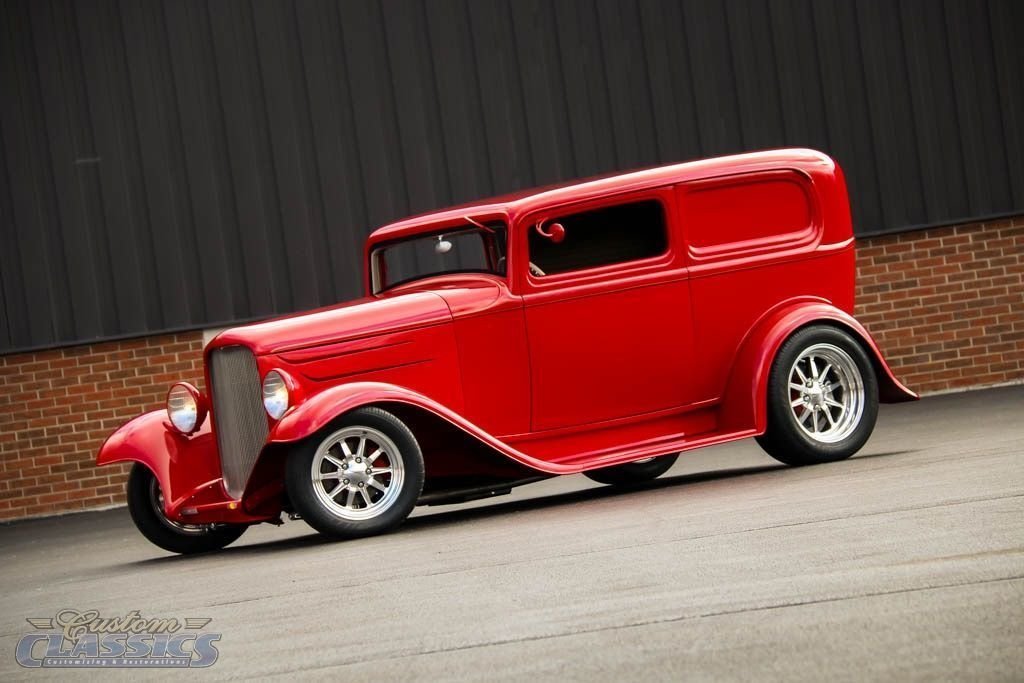 More than 84 years since the introduction of the 1932 Ford, alternatively and lovingly known for generations simply as “The Deuce,” this vehicle still ranks among the top of a myriad of lists of the most important automobiles ever to be produced anywhere in the world. The 1932 sedan was a landmark car for Ford and was the answer to the many critics who had written off Ford Motor Company as the “Flivver Car Company”. This was all in reference to the the Ford Flivver - a small single-seat plane “for the common man” that was just over 15 feet long and had a wingspan of just a hair under 23 feet. It ran on a 3-cylinder, 35-horsepower engine made by the Ford company Anzani, and it weighed just 350 pounds when empty. However, the project went south quickly after a fatal test pilot crash leaving Henry Ford devastated and ridiculed. However, that didn't stand in the way of what was next for Ford's team. In 1932, Ford introduced Henry Ford's groundbreaking V-8 engine that brought strong V-8 power to the masses. Massive production numbers, legendary durability, and relatively low cost made it the ideal base material for legions of early hot-rodders and the foundation for the aftermarket performance industry. Henry Ford had hit another home-run with his '32 Ford.

The presence of “The Deuce” continues strong today with street-rodders and their love affair with this body style continues strong to date. Even though massive production numbers of these cars were built, many of them rusted away in fields, but people continue to build these with new reproduction bodies and even restoring original old shells found out in the sticks. As noted in the book written by Robert Genat, the sedan delivery was the useful yet elegant sedan delivery. Ford built them by converting two door sedans with the rear quarter-window glass replaced by steel and a big rear door installed with a drip rail added above it. The Ford noted experts report that Ford built just 400 examples of these sedan deliveries for the US and six more for export. Making these utilitarian three-door deliveries the rarest of the '32 Ford models to have ever been produced out of all available body styles sold to the public.

We now have before you one of these original ALL STEEL Ford Sedan Deliveries. This is your opportunity to own one a just a few original sedan delivery cars.

Now lets go over the highlights for this beautiful street rod:

WITH ONLY 980 MILES ON THE SPEEDO SINCE IT WAS FRESHLY BUILT, YOU'RE ASSURED TO HAVE FUN WITH THIS SWEET SEDAN DELIVERY FOR MANY MORE MILES TO COME.

We mention to our customer's time and time again (because it really is true); you couldn't build this classic for what we're asking! Even more so, finding one of these sedan deliveries to build yourself would be a feat in itself. Save yourself the stress, time, and no doubt money, and get yourself into this hot-rod just in time for the Spring cruises and car shows. This will not last long in our showroom especially with a hot red paint job and some beautiful spring weather on its way. Don't miss your chance to own a true American Classic, call us today!