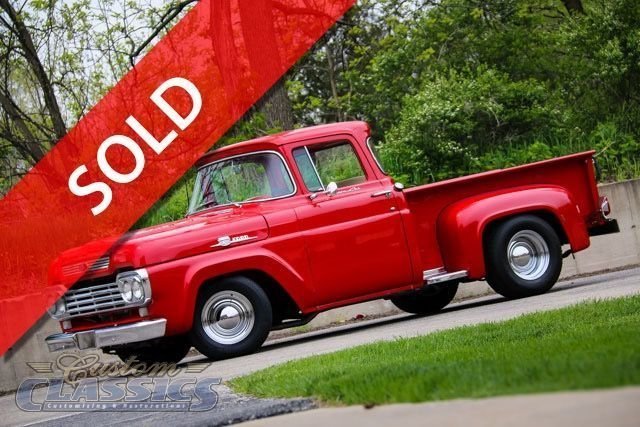 Ford Pickups have held the “Top Selling Truck“ title for many, many, years now. And it's no wonder when you look back to it's older ancestors like this one. Ford's design, like many other manufactures, has changed looks from decade to decade, and this '59 Ford has an Iconic design that lasted roughly 3 years from 1958 through 1960. With the trucks being so hot this year, and these '59's in such small supply, here's a great opportunity to snatch up one clean Ford.

This beautifully restored F100 came to us from Kansas City where it has spent some of its life. The truck was built in California, so we are guessing that's where it spent most of its life, just based on the fact of the very clean and very solid condition of the body.

Starting right up front of this Ford, we see an expensive all-chrome grill and chrome front bumper neatly placed, with an updated Ford Emblem placed at dead center of the upper grill work. Moving down the sleek sides of the Ford you'll find more chrome at the doors, with its new emblems and mirrors, as well as next to the steps on the sides of the bed. Chrome slats on the tailgate finishes up the rear of the truck and a nice big new chrome bumper hangs below. As you can see in all of our pictures the chrome doesn't stop there. Check out the new wood floor just installed in the bed, with the chrome slats and chrome bolt kit that really finishes off the outside appearance of this old Ford and highlights the beautiful woodwork.

You and I both know that if you were given a truck and spent years in the garage building it, you would still have way more invested in it just in parts than what we are asking for this truck here in front of you.

Under The Hood:
This Ford started its life with a little 292 V8 pushing a whopping 158 HP, but that was then. Now it is out fitted with a 460 V8 with only approximately 1000 miles on it since completion. On top the 460 sits a Holley carb, mounted on an aluminum intake manifold. Air comes into the motor through an open air-cleaner that adds a little appeal under the hood, along with the aluminum valve covers. The engine bay is very detailed and the new wire harness is all routed in factory looking locations.

The truck still mostly has an original look under the hood other than a couple of shiny aluminum parts. As you can see in the pictures, the previous owner started down the path of installing an A/C system in this old Ford. He has the A/C compressor mounting bracket already mounted to the engine block, and a new A/C condenser installed on the core support. The next owner could finish it off and end up with an air-conditioned cab.

Power steering is a must in these old trucks, and this one had it added during the restoration, as well as having a big new aluminum radiator installed to keep things cool on those hot summer nights.

Suspension and Driveline:
This Ford is still riding on the original front spring and I-beam system it was built with, other than the springs and suspension parts have been replaced for peace of mind while driving. Also added during the restoration were power brakes which makes stopping this Ford no problem at all. At the rear of the truck is an updated Ford 9” rear-end with 3:73 gears. If she looks lower than normal, the answer is yes; she's been lowered 5” to give it the raked look you're seeing here. Pushing this truck down the highway and turning power to that ford 9” rear-end is a Big C6 Ford trans, so we don't think you're going to be over heating this baby even if you did decide to pull something, they even installed a Ford Trans cooler up front just behind the grill.

Wheels & Tires:
Nothing like the Good 'ol Days… we think finishing off this restoration with the right look took installing a set of 15” chrome rims, and chrome baby moons. Up front the truck sits on a set of Steel Trak premium radials P225/70 R15, and in the rear it has a set of Uniroyal Tiger Paw GTS radials P225/70R15

Interior :
The Chrome just keeps going on the inside too - don't you just love the 50's! All of the cars back then had lots of chrome; well I guess some of the trucks did too, with the help of the guy who restored this one. Inside you'll find a new set of Dolphin gauges so you can keep an eye on your speed as well as what's going on with that big 460 V8 too. New carpeting greets you at the floor in jet-black, while the rest of the interior is finished off in nice light tan leather-like look on the seat, and to finish things off above your head, he even added the FORD logo in the head liner. The sun visors are also recovered, and the interior dome light was replaced.

Even though it's an automatic, a Lokar shifter was added to give the truck the appearance of a four speed for that authentic trucker look. And one last creature comfort if you're looking at the picture close, you'll see a tilt steering column was added for a little more comfort while driving this ford. Lastly you must have sound - I don't mean the engine sound… I mean tunes! We just added a new pioneer AM/ FM CD unit, with new Pioneer speakers in the doors for summer cruising.

So If you're a Ford Truck kind of person and really like the 50's models, then this truck is for you. If you've been looking and looking, and you've been seeing the price of trucks well above fifty thousand dollars, you might want to pick up the phone and call Gary before this one goes fast. I'm sure it won't last long the way he has it priced. Recently finished and ready for a cruise night in your town, don't let the summer slip by without this truck in your garage.