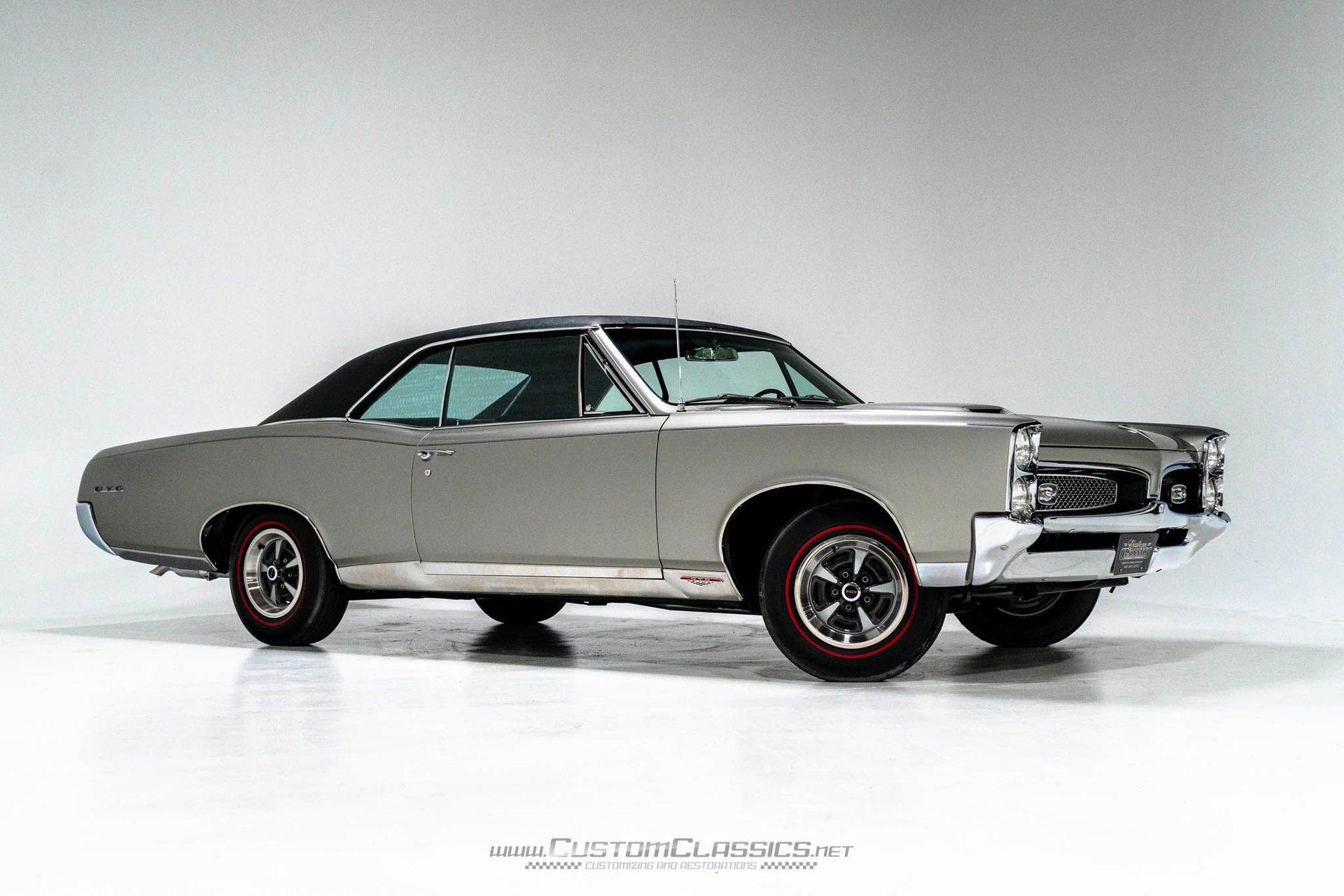 If you're a fan of style, speed, and swagger, you simply can't go wrong with Pontiac's storied GTO. The goat practically defined the Golden Age of Detroit, and by the time its first production run was over, it had become the best-selling muscle car of all time. Not surprisingly, demand for these cornerstone classics continues to be strong, and in the first half of 2020, we shipped three awesome GTOs to three very satisfied owners. Benefitting from detailed restoration, this Impressively well-documented hardtop is probably one of the coolest Pontiacs we've ever offered. With a correct drive train, solid original sheet metal, and a correct Silver Glaze color combination, it's an excellent turn-key muscle car for anyone who enjoys cruising fast, wide and loud. Looking for an impressive classic that'll roll straight out of the showroom and right into your garage / or man cave? Here's your chance to grab a tiger by the tail!

The beneficiary of acute restoration, this super cool A-Body is a perfect blend of good craftsmanship and great attention to detail. With a solid body present and accounted for, the car was carefully straightened and sanded into better-than-new condition. Once that comprehensive metalwork transitioned from the Shop floor to the paint booth, These original classic '60s panels were re-sprayed in their correct GM code Silver Glaze. When that paint dried, it was sealed in glossy clear and accented with clean pinstripes. And today, officially unleashed as the epitome of old-school American style, this goat is one seriously head-turner that can drop jaws just as easily as it can win trophies.

Tough, understated, and attractive, this GTO perfectly defines Pontiac's lasting legacy of tempering sophistication with aggression. The front of the car is dominated by trademark, stainless-trimmed grilles that are anchored between stacked headlights, a satin-finish arrowhead, and a body-width bumper. Inside those grilles, a prominent “GTO” emblem hints at the performance bolted beneath a subtle hood scoop. At the sides of that scoop, expressive 'coke bottle' fenders hang slim wheel trim and polished rocker moldings around correct chrome door handles. On the outsides of those fenders, bright GTO crests complement black “G T O” quarter scripts, creating visual excitement to match the car's visceral thrill. Above those crests, like-new glass joins straight drip rails, highly restored stainless and correct mirrors to highlight the car's awesome, pillarless profile. And behind that glass, a second body-width bumper hangs integrated reverse lamps below a slotted valence, an ominous “G T O” badge, and a small Hurst emblem.

Raise the car's long steel hood and the first thing you'll notice is a raucous 400 that's been completely rebuilt and layered in attractive Turquoise paint. Less obvious, of course, is that stalwart V8's correct casting number, & casting date ( shown in our pictures )and 335 horsepower, Auto Trans with the trim tag as shown in pictures still on side of the trans. A bored version of Pontiac's 'Trophy 389', this legendary block, is good for 335 horsepower and 441 lb./ft. of pavement-charring torque, continued the brand's theme of producing purpose-built performance engines. Its big 4-barrel carburetor feeds a correct cast iron intake, which is bolted between attractive chrome valve covers. Fires are lit by a familiar points distributor, which jolts spark through 7mm Standard Triple Silicon Wires. Cooling is provided by a correct radiator, which sends water around a correct fan shroud via pliable hoses and traditional tower clamps. This car has the Correct California A.I.R. emissions system on it, which I dare you to try and find, And charred dinosaurs are funneled through a nice pair of restored exhaust manifolds. At the back of the clean mill, you'll find a show-finish brake booster that feeds a quartet of heavy-duty drums. At the front of the engine, a Delco Energizer battery keeps the electrons flowing. And everything between the car's smooth, Satin Black fenders has been fully restored and looks great!

Logging sunny day miles since attaining collectible status, this goat's subdued original floors and super clean frame are completely free of issues and any defects. The stout 400 sends power to a Turbo 400 automatic transmission, that proven trans spins a tough GM 2:92 set of gears. At the sides of that rock-solid drivetrain, aluminized, true-dual exhaust pipes connect the aforementioned manifolds with correct mufflers. At the sides of that booming soundtrack, a fully rebuilt/restored suspension is complete with factory-optioned power steering and heavy-duty power drum brakes. Muscle meets the pavement via 14-inch Pontiac Rally IIs, which spin a set of red-line Bias Ply tires around chrome trim rings and correct PMD center caps. And absolutely everything, from this Poncho's fresh stainless fuel tank to its clean Turquoise oil pan, is fully sorted and ready to pound the pavement!

Open this coupe's doors and you'll find a fully restored, and correct, GM Black interior that's simple yet sporty. Front and center are firm bucket and bench seats, which feature bright chrome trim, cool pleated covers, and era-correct lap belts. The engine's vitals are displayed by a rebuilt gauge cluster, which integrates round-faced dials and a correct Delco radio into a veneer-trimmed dash that's reminiscent of European sports cars. On the floors, the new carpet anchors a chrome Hurst shifter inside a stainless-trimmed console. At the sides of the car, fresh door panels feature new chrome handles and straight stainless trim that parallels bright GTO crests. In front of the driver, a satin-finished steering wheel spins an attractive wood ring around a Turquoise, Pontiac-branded column cover. And behind the passengers, a clean trunk sandwiches a correct jack and a full-size spare between a standard mat and prerequisite deck-lid decals.
This awesome GTO is an impressive muscle car that features an ideal blend of performance and style. Thanks to its acute restoration and correct drivetrain, it'll be an absolute pleasure to drive and show off. If you've been patiently waiting for the opportunity to pick up an excellent example of the ORIGINAL muscle car, here's your chance!

1967 GTO Awards Information / Recap & side story of its History we know:

The car was in California until 1987 when the current owner purchased it. It was owned by an Asian woman who meticulously cared for the car until around 1986. The car was purchased by a younger man who only owned it for 6-8 months. At that time the owner purchased the car and brought it to Illinois.

Car has ALL its original sheet metal and floor pans.

Car had Nut & Bolt restoration and was done to meet the exact standards when the car was assembled at the plant in 1967. The car has been judged by multiple judging teams multiple times achieving Gold level awards since 2009. It has maintained these levels throughout this time. The organizations who have judged this car are but are not limited to;

In 2021 it won "Best Restored" at the GTOAA Nationals

Note: Awards shown in our pictures go with this car.

Note: Only ONE SET of tires & wheels comes with this car. Either take the ones on it, or the stock set shown in our pictures.

We Can Ship Anywhere in the world, ask our sales manager Gary for more information.