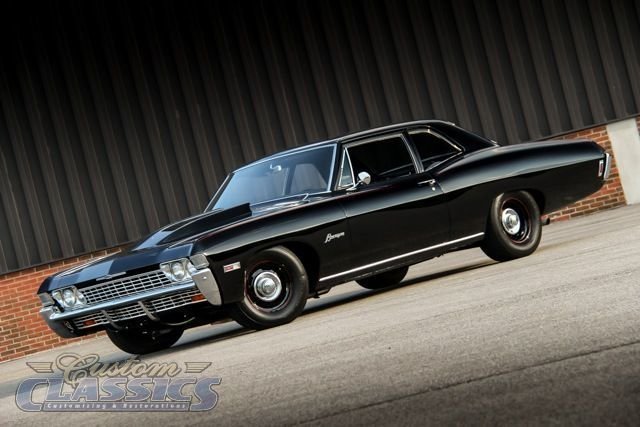 “WOW!” was all I could say the first time I laid eyes on this stunning 1968 Chevrolet Biscayne two door! If you ranked the cars that Chevrolet produced in the 60's, the Biscayne may come up at the bottom of the totem pole as far as creature comforts and extras, so it's unusual to see a restored example done to the standards of this car. Long favored by hot-rodders due to its no-nonsense nature and appearance, the Biscayne embodies the best of 1960's Chevrolet styling, and the best of its performance as well.

A little history on the 1968 Chevrolet Biscayne 2 Door Sedan:
The Chevrolet Biscayne was a series of automobile produced by Chevrolet for model years 1958 through 1972. Named after a show car displayed at the 1955 General Motors Motorama, the Biscayne was the least expensive model in the Chevrolet full-size car range (except the 1958 only Chevrolet Delray). The absence of most exterior and fancy interior trimmings remained through the life of the series, as the slightly costlier Chevrolet Bel-Air offered more interior and exterior trimmings at a price significantly lower than the mid-line Chevrolet Impala.

Biscaynes were produced primarily for the fleet market, though they were also available to the general public — particularly to those who wanted low-cost, no-frills transportation with the convenience, room and power of a full-size automobile. While most Biscaynes were sold with a six-cylinder engine through the late 1960s, the V8 engine became the more popular power plant by the early 1970s. Power steering and power brakes were made standard in 1970, while the Turbo Hydramatic transmission was standard on all cars ordered with a V8 engine starting midway through the 1971 model year.

Like the slightly upscale Bel-Air, Biscaynes were easily identified by the use of two taillights per side; the only exceptions to this were in 1959 and 1972. The more expensive Impala (and later Caprice) had three taillights per side. The Biscayne was largely devoid of exterior chrome trim and was normally fitted with small hubcaps, though several exterior trim pieces and upgraded wheel covers were available at extra cost. Interior trim was spartan, with lower-grade cloth and vinyl or all-vinyl upholstery trim, a standard steering wheel with center horn button, and rubber floor mats.

Many of the luxury convenience options available on the more expensive full-sized Chevrolet models, such as power windows, were not available on the Biscayne. However, customers could purchase a Biscayne with any of Chevrolet's high-output big-block V8 engines and performance-oriented transmissions, including the floor-mounted 4-speed manual transmission with Hurst shifter and low-ratio final drive. Original production numbers of cars built this way were very low, and examples of these high-performance cars are highly sought after by collectors today. Biscaynes with high-performance equipment were often nicknamed "Bisquick" by enthusiasts.

About this Biscayne:
To begin the restoration process, this Chevy was completely repainted and most of the chrome was replaced. As part of the restoration process, every body bumper, gasket and weather-strip was replaced. The chrome bumpers were both refinished on this Biscayne to perfection. The car is incredibly nice from every angle. The trunk is expertly custom restored with new black carpeting installed throughout as seen in the pictures - it really adds a nice “show-ready” finish. Everything on the car, including the doorjambs, the hood underside and undercarriage is painted and detailed nicely. Even the steel wheels have been meticulously refinished with fresh black paint, original style dog dish center caps and then wrapped in BF Goodrich Radial T/A rubber (235 70/15 Front & 275 60/15 Rear). A graceful fine red pinstripe was meticulously applied by hand to the wheels to match the tasteful red pinstripes gracing the side of the car.

Mechanically, this Biscayne is all business. Under the hood is a newly rebuilt 427cu.in. Big Block V8 engine that is waiting to be tamed. The engine runs cool thanks to a new radiator and water pump, with all new hoses and clamps. The potent Big Block transfers power to a Borg-Warner T10 4-speed manual transmission, and then into the Auburn Posi rear-end with Richmond 373 Gears. The exhaust is also new as part of this great build and gives the car a real, throaty V8 rumble. A brand new replacement battery is on order for the Biscayne. The braking system is also rebuilt, with four-wheel front disc brakes drilled and slotted and new lines.

In summary, this is a top-notch, no-bull car that is ready for years of endless showing, cruising, racing... whatever you choose – it will not disappoint. There has only been approximately 1,000 miles put on the car since finished! It's no trailer queen though; this American muscle car has been begging to get out on the road to be driven hard.

Whether you grew up around these cars, or can simply appreciate them for what they are, understand that this 1968 Biscayne very nearly represents the end of an era in American automobile manufacturing and styling. The classic muscle car design, the no nonsense, no frills, and clean and simple approach… it all worked so well for this car! This is a car to cherish, drive, and treasure for now and for future generations to come. Not to mention – it comes with some serious bragging rights. Don't miss out on this car!